Walhalla: The German Hall of Fame

Walhalla: The German Hall of Fame

An infatuation with all things Bavarian-Hellenic

Churches, castles and monasteries: Many of the historic buildings on the Route of Emperors and Kings are truly unique. Dedicated 155 years ago as the ‘Hall of Fame of the Germans’, the Walhalla at Donaustauf holds a special position among them – and also recalls the time when the Bavarians anointed the Greek king.

Many a traveller had to stop by the massive façade atop the Bräuberg mountain near Donaustauf, not far from Regensburg, to make sure that the temple – which would be much less out of place on the Mediterranean than it was along the Danube landscape – was not a mirage sent from Athens to Bavaria. But these tonnes upon tonnes of limestone are real and they form Walhalla, even if, depending on your perspective, this may seem grotesque or fantastical.
However, the neo-antique pageantry of classical Greek construction and thinking may be less anachronistic than it might seem at first glance. 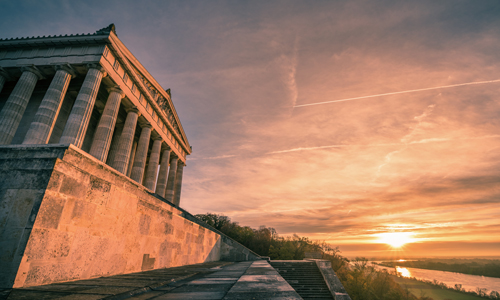 Walhalla Sonnenaufgang © Andreas Beiderbeck Photography
For the love of heroes

Instead, this place of worship for Germany’s poets and thinkers lines up with the primeval human need to give our fascination with cultural figures a three-dimensional expression in the literal sense. Around the same time as the Walhalla’s builder, Bavarian King Ludwig I, began musing about a temple with sculptures of the German intellectual greats, Marie Tussaud’s collection of wax figures was first being exhibited in London in 1802 – with overwhelming success. In the years since, the lifelike 3D replicas of the prominent figures found in Madame Tussaud’s in London, Paris and Vienna have lost none of their tourist appeal.

As was the case with the Walhalla, the Rock’n’Roll Hall of Fame in Cleveland, which was only opened in 1995, boasts the same attractive qualities in terms of its wish to build a temple to important artists, even though it was built over 120 years on. 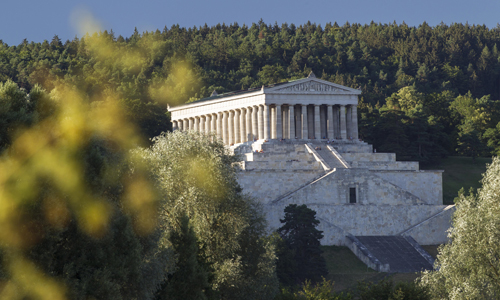 Similar to how millions flock to see Elvis and other famous faces generations later, Bavarian King Ludwig I was inspired by ancient Greece and its grand intellectual past – which also allowed him to incorporate his passion for all things Hellenic into the neo-classical image of his time. The idea for a ‘Teutonic temple of honour’ came to the romantic royal from the House of Wittelsbach during a trip to Greece.

Ludwig also expressed his passion for the past in pursuits other than the Walhalla. He also revived of medieval titles of nobility and had numerous buildings that are now indispensable to Munich’s cityscape built. These include the Siegestor arch, the Bavarian State Library, the Alte Pinakothek art museum and many more.

Like many of his contemporaries, the monarch, ever conscious of tradition, regarded the final dissolution of the Holy Roman Empire (German nation) in 1806 as “Germany’s deepest shame”. The predominance of the French under Napoleon in many parts of Germany also made his patriotic heart bleed. Nevertheless, people should not put Ludwig I firmly in the nationalist corner just yet: The well-educated art lover was an expert on ancient history, was familiar with French, Italian and Spanish literature and had mastered Russian. And as far as allocating space in the Walhalla was concerned, Ludwig I focused less on warlords than he did on humanists like Goethe, Schiller and Erasmus of Rotterdam.

Under these circumstances, the Walhalla is intended to play more of a therapeutic role: as a painkiller for the cracked German self-confidence. By 1807, at the time still crown prince, Ludwig commissioned a series of busts of ‘praiseworthy Germans’, which, decades later, would be used to decorate the Walhalla.

In 1810, when Ludwig started what is now the traditional Oktoberfest celebration with his wedding on the Theresienwiese in Munich, the archaeologically skilled architect Carl Haller von Hallerstein went to Athens funded by Ludwig to survey the construction of the Parthenon on the Acropolis, which would later serve as the model for the Walhalla.

Five years later, the architect submits a good two dozen drawings, only to die an early death in 1817. In 1819, architect Leo von Klenze acquired the posthumous sketches and used them as the basis to plan his designs for the Walhalla.

However, it would still be some time until those plans would be brought to life. In 1830, the foundation stone was laid for the ‘Hall of Fame’ on the 17th anniversary of the Battle of the Nations near Leipzig, and construction began one year later. Construction of the football pitch-sized architectural colossus, which measured 125 metres in length and stood proudly at 55 metres tall, took until 1842. It would be another twenty years until its formal opening in 1862.

When this was finally completed, the Bavarian King had already abdicated, long since taking an interest in other matters and, as literary scholar Claudio Magris noted in his groundbreaking book, “Danube”, was “overwhelmed by the events of 1848 and his passion for the beautiful Lola Montez”.

1862 was a significant year in Hellenic-Bavarian relations for another reason as well: It is the year in which Ludwig’s son Otto was deposed as King of Greece and went into a well-known exile, travelling home to Bavaria. This marked the end of an era that was as historically unique as the Walhalla itself. It began when Greece gained its independence from the Ottoman Empire in 1830, but became headless in 1831 after its first ruler was assassinated.

As the signatory powers of the young nation, Russia, France, and Britain insisted that the Greek National Assembly elect a European prince as king. After its first two candidates rejected the offer, the choice fell to Otto, who was then still underage. Though he would still retain his title as a Bavarian prince, he moved to Athens with 3,500 Bavarian soldiers and a handful of administrative experts. 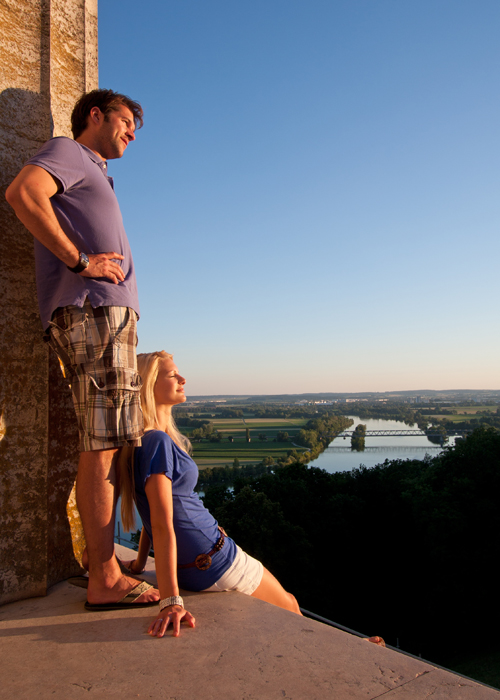 Minister Rudhard embarked on a journey from Passau directly to Athens. Falling into the cliché, he was much less willing to give up his beloved Bavarian beer as his colleagues were. En route along the Danube, Rudhard took to drinking from a barrel of beer he had brought with him and, upon arriving in Athens, the Bavarian minister immediately set about opening a large brewery and the beer-houses to match. In the words of von Wastlhuber, the secret chronicler of the ministerial chancellery, this “transformed Athens into a suburb of Munich”.

With numerous laws and regulations, including Bavarian purity requirements for beer, Bavarocracy would lay the foundations for a modern state, but its absolutist view of administration would come to alienate the people of Greece.

Otto, on the other hand, would cling to his enthusiasm for all things Hellenic, just like his father, up until his dying breath, uttering “Greece, my Greece, my dear Greece” as his last words. In exile in Bamberg, Otto and his wife Amalie would attend daily Greek lessons and what remained of the court would gather in Greek dress every evening for two hours of Greek conversation.

With the Walhalla, Ludwig not only left his descendants saddled with what was by far his most expensive project, but also with a number of challenges. The idea of exhibiting the sculptures of still living poets and thinkers in what he called the ‘Hall of Expectation’ in the building’s substructure and to solemnly carry them up to the Olympus that was the ground floor upon their death was discarded even during Ludwig’s own lifetime. But the question now is who will have the right to a place in the Walhalla in future – and how should a republican democracy deal with such a monumental legacy, the image of which was badly affected by National Socialism.

Who is allowed in?

In the struggle for the heroic status among various intellectuals, Martin Luther was granted his place in the Walhalla five years after its opening. In 2003, the bust of young resistance fighter Sophie Scholl was prominently placed in the last spot next to the door. In 2007, mathematician Carl Friedrich Gauss followed with his induction into the Walhalla, and in 2009 the bust of the nun, philosopher and women’s rights activist Edith Stein, who was murdered at Auschwitz, was added. What is currently the most recent addition to the Walhalla is quite a juicy tale: With Heinrich Heine’s induction in 2010, one of the temple’s harshest critics was added to its ranks on the banks of the Danube. It’s exciting to consider who might grace its halls in future: There are still four spots free.