Upstream - Downstream: Trade on the Danube

Trade along the Danube

In this day and age, all it takes is the touch of a button on the computer and products from all over the world are on our doorstep in a matter of days – often just hours. Shopping at the supermarket should also be done quickly. Wait, haven’t I forgotten something important? I hurry back to the spice aisle, and a packet of salt lands in my shopping cart a little later.

Salt, probably the most important spice that makes soups, appetizers, meat, vegetables, bread, and even desserts, and thus actually all dishes tastier, is taken for granted these days.

But let’s catapult ourselves back a few centuries, let’s take a trip back in time. Back then, when there was no Internet, no supermarkets. Cars and trucks didn’t exist anyway, because gasoline was unknown. How did salt get into people’s cooking pots back then? 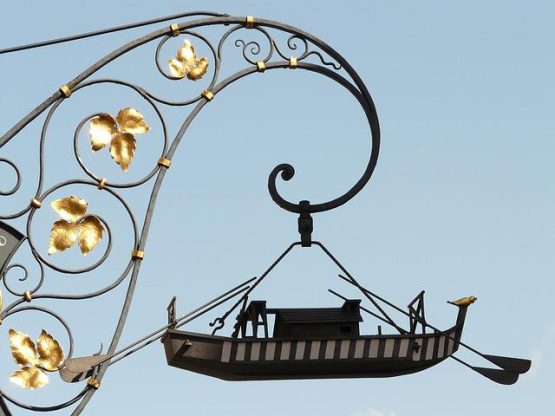 If we stand in front of the Ulm Town Hall and look up to the southern gable, we can see a wooden boat with a flat bottom and straight sides, the so-called Ulmer Schachtel. Characteristic for this type of boat is a black and white stripe painting.

While in the 12th century both goods and people were transported downstream by raft, the shortage of wood in the 16th century demanded a new strategy. The first transport zills, or Ulm boxes, were created. With a length of 22 meters and a width of 3 meters, they offered enough space for a wide variety of goods.

In addition to wine and drapery, wood, leather, cheese, dyes and flints were transported in the Ulm boxes. An early export hit was also snails (“oysters of the poor”), which were traded as a delicacy in Vienna.

The Ulm box is also known as the “Viennese Zille”, because Vienna was the destination of this means of transport. From the year 1712 the ships were named “Ordinari ships”. Ordinari means regular, so at that time there was already a fixed timetable with a regulated tariff system.

As time travelers, we take a seat in an Ulm box and travel down the Danube, where we disembark in Regensburg. 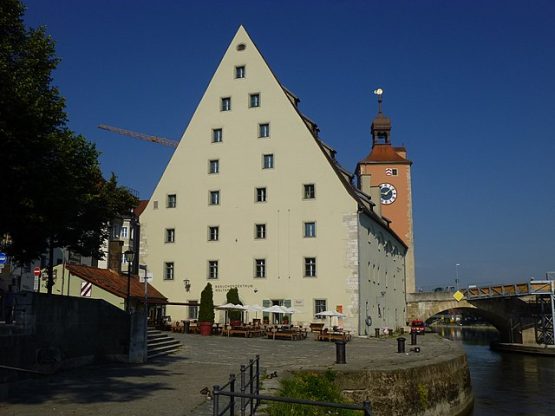 Salt has always been a coveted and precious commodity. In the Middle Ages, it was even weighed out with gold, which gave it the name “white gold. In those days, salt was considered an important, if not the most important, preservative. Only the very rich could afford to season food.

Those who traded in salt could therefore count on rich profits. In the 16th century, the trade monopoly for salt lay with the so-called salt lords, before the city of Regensburg put an end to this game. For a short time, the Duchy of Bavaria got in the way, but in 1616 the time had come and the Salzstadel, which is still very much worth seeing today, was built.

At that time, the salt was mined in the Reichenhall salt works, brought to Passau and shipped up the Danube. This effort could only be accomplished with the help of horses. Up to 40 horses were harnessed to the ship trains and pulled the freight upstream. The horses moved along the towpaths, called Treppelwege in Austria.

However, we climb back into our Viennese Zille and drift leisurely along the Danube toward Passau. 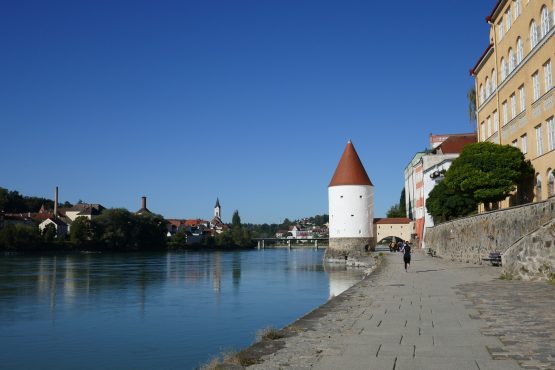 PassauSchaiblingsturm(c)GudrunKrinzinger.jpg
The commercial city of Passau

As in Regensburg, the saying “Unser Salz, Gott erhalt’s” (“Our salt, God preserve it”) also applied in Passau. This was because Passau benefited from the Niederlagsrecht, which meant that every delivery of salt had to be offered for sale for three days.

This right to lay down or stack salt helped the city to achieve considerable wealth. The Schaibling Tower, on the banks of which the precious cargoes were unloaded and reloaded, is a stone witness to this glorious time.

However, when Bohemia came under the rule of the Habsburgs, other sides were raised. The import of foreign salt was forbidden, after all they wanted to make rich profits with the Habsburg salt from the Salzkammergut.

After we have admired the sights in Passau extensively, we get back into our Zille. A scenic route lies ahead of us, but also a particularly wild one.

We embark again on our Ulm box and have to move close together, because goods upon goods pile up on deck. Linz is our next destination and if nothing else interferes, we will reach the city in time for the Easter market.

In Linz, the paths of the Danube cross the mule track that led from the Adriatic to Bohemia and on to the Baltic Sea. For this reason, the Babenbergs had a unique marketplace built, which, with a total area of 13,200 m², will go down in history as the largest enclosed main square in Europe.

In addition to the already mentioned commodity salt, iron, animal skins, cloth, wine and grain also change hands. Even more goods end up in our barge. The next stop is planned in Stein.

Although the village of Stein is located directly on the Danube, space for trading areas at that time was scarce. Krems, on the other hand, had a castle and enough space for trading activities. So people made a virtue out of necessity and came to an arrangement. Ships of all sizes were reloaded and rebuilt. Krems, like Linz, became an important trading town.

And such well-known products as Krems mustard, Wachau saffron and wine ended up in the horse-drawn tow trains that were transported up the Danube. 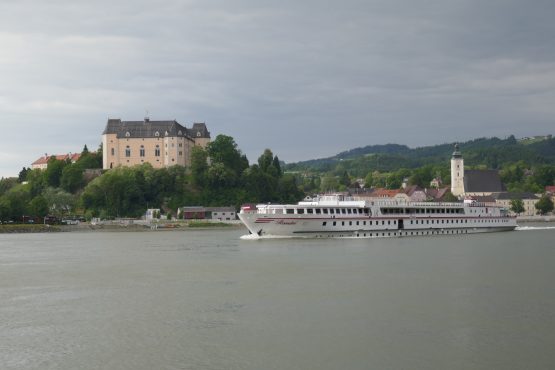 In early times, the Danube was anything but a calm, quiet river. It was a wild body of water with shallows and dreaded water eddies. Especially the area near Grein was feared. For a long time, this section was considered the most dangerous passage for ships.

The citizens of Grein were able to use this circumstance to their advantage. Finally, the flat shore at a bay allowed the last possible landing of the ships before these feared whirlpools (=Struden), which even gave the region Strudengau its name. Thus pilots were taken on board, who skillfully navigated through the shallows. If the Danube had too little water, however, the entire cargo had to be unloaded. It was transported overland to the next port.

The Greiner paid dearly for this “service”. But even though the journeys on the Danube were heavily regulated by tolls, stacking rights and monopolies, they were always cheaper and safer than transport by land.

Our journey from Ulm to Vienna took 12 days, much shorter than if we had boarded a carriage. We landed directly below the Rupertikirche, today this church is called Ruprechtskirche. Saint Rupert is the patron saint of the salt boatmen.

Being a curious person, I look around and discover other goods besides salt, such as marble, paving stones and roof shingles. A shipmaster tells me that he once carried two lions, a tiger, pelicans and monkeys for the imperial zoo. Should I believe him? There is also talk of expensive Burgundy wines, silk, tropical fruits and olive oil destined for the Viennese nobility and clerical lords.

Back to the future

A snap of the fingers later, we find ourselves back in the year 2022. Perhaps on an excursion boat in Regensburg, Linz or Vienna, perhaps on a cruise ship somewhere in between. We pass by cities steeped in history, castles and monasteries, and enjoy the magnificent buildings that would probably never have been built without salt and without the Danube.

Gudrun Krinzinger has taken you on this journey through time – www.reisebloggerin.at

In the course of the INTERREG project Transdanube Travel Stories, Jörg Zenker from Ulm wrote one of the narratives on the topic of trade, which is briefly teased out here:

Apart from military and religious movements, eventually followed by tourism, the Danube region has always attracted – and been dynamised by – trade. Trade has inspired the cultural and regional exchange of goods and people in the Danube region: raw materials have been exploited or processed there, markets developed, businesses founded, and people brought together … The Danube is one of Europe’s oldest trade routes, providing ample material for cross-border stories, encounters and experiences. Merchant families have expanded across countries through marriage and business relations; trading practices, currencies, payment systems, and even culinary specialities have spread in the region through trade. But the Danube has also seen the darker sides of trade – namely in the form of human trafficking, drugs, prostitution, and organised crime. The Danube writes countless stories. These include the shrewdness, rapacity, smuggling, and of course the honourable trade in the Alemannic source area of the river; a “live-and-let-live” philosophy in the Catholic/Baroque Bavarian-Austrian region of the Danube; and the bazaar mentality that still characterises trade in the Balkans and fascinates tourists.

Merchants have brought cultures together and have had a formative influence on them. Families – many Jewish families, too – have acted as patrons of arts and culture and have built impressive private and commercial buildings for many generations. Along the Danube, you will come across stories about merchant dynasties of the Buddenbrooks type. However, some of the most fascinating and most dramatic family stories were written not by trade, but by love, separation, success and failure.

Today, the first steps of business are increasingly made in digital form. In the old days, on the other hand, business relations were primarily established through charm, esprit, cultural and ethnic exchange, or simply through the magic of wealth. Trade also took the shape of meetings and gatherings at markets, celebrations of culinary and cultural traditions, and political conventions like the Perpetual Diet of Regensburg or the Vienna Congress. Businessmen were always present at such events to establish relationships or fathom their options for new markets.

You can find the full story here!

The Author: Jörg Zenker is a trained tour guide, Danube Guide and author and lives in Ulm. He leads the Zenker Verlag.