The spiritual traces of Maria Theresa and her daughters

Arch-catholic: The spiritual traces of Maria Theresa and her daughters

The House of Habsburg and Catholicism have always been inextricably intertwined. This connection manifests itself not least in Vienna’s famous Capuchin Crypt, where several members of the former ruling dynasty face eternity in magnificent sarcophagi. In this article, we will take you on a journey down far lesser-known paths of Habsburg religious mania, and show you the places where Maria Theresa and her daughters left their spiritual traces. Which pilgrimage sites were important to the ruler and the archduchesses, and what role did religious education play? It is a journey back in time to the 18th century, when piety and vampire cult coexisted. And our Habsburg women were always right in the middle of it!

Why was religion actually so important for the ruling house? Two main points can be identified: On the one hand, it was part of the Habsburgs’ self-image to assume that God had appointed them as his representatives on earth in order to rule as close to religion as possible. On the other hand, the Catholic confession was of course also used to exercise power: where else could one reprimand one’s subjects on a large scale more skillfully than from the pulpits of Baroque sacred buildings? 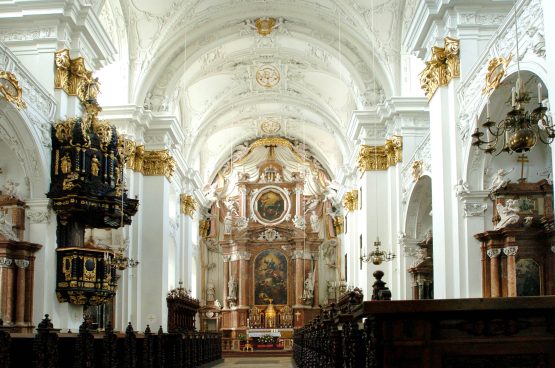 In terms of the route, let’s start back at the starting point of the last article – in Linz, Upper Austria. As we have already learned, Maria Theresa always married her daughters profitably to the prince who could offer the most secure alliance that would advance the dynasty. If a daughter did not manage to find such a wealthy husband, her only option was to become a nun in a convent. This was the case with Archduchess Maria Elisabeth, at first the most beautiful but also the most sharp-tongued of the daughters. Although there were several admirers, such as King Stanislaus II August of Poland and the French Duke of Chablais, the attempts to make contact failed for political reasons. Because of her coquettish beauty, however, Liesl did not have to fear going away empty-handed – did she? In 1767, the Viennese smallpox epidemic changed the course of history by disfiguring Maria Elisabeth to such an extent that she was henceforth considered unhireable. What remained was her crude sense of humor, which often caused offence. Her last resting place was in the Linz Jesuit Church (Old Cathedral), where she was buried in 1808.

But how did she spend the years between 1767 and 1808? Well, after the death of her husband Franz Stephan in the Innsbruck Hofburg, Maria Theresa had established a noble ladies’ convent where people prayed for the salvation of their deceased spouse. Franz Stephan’s death chamber was converted into a chapel, and can still be seen today in the Hofburg.

In 1781 Maria Elisabeth took up her post here as head of the monastery, which she filled with devotion. She always spoke the truth without shyness, for which the people of Innsbruck revered her exceedingly. 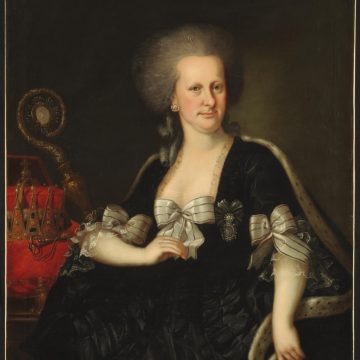 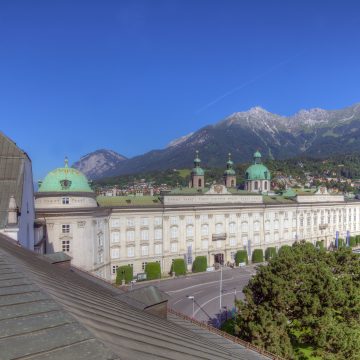 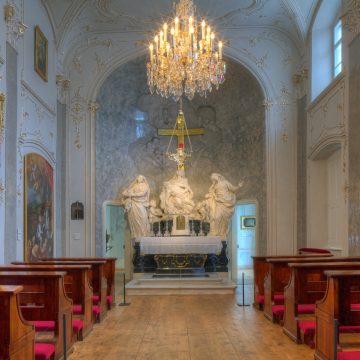 Incidentally, the Adelige Damenstift still houses a few abbey ladies today. In the 1930s, some of the rooms of the monastery were converted into a monastery cellar, where today one can dine heartily and toast in honor of Maria Elisabeth.

Maria Theresa’s daughters, whether they were future canonesses or richly married, were all brought up extremely religiously: every day there was the obligatory prayer in the morning and evening, including the sign of the cross, followed by the praying of the rosary in the afternoon. All this was, of course, strictly supervised! And even in later years, when the daughters had long since left the parental nest, the overmother Maria Theresa still influenced the spiritual customs of her daughters by letter.

Extreme strictness was also the order of the day at the table: fasting commandments, for example, were not to be broken under any circumstances! Besides the Lenten soup, there were only egg and pastry dishes, but no sweets, fruit, baked goods or coffee. Even those daughters to whom the fish served on fasting days gave them a stomach ache were forced to eat it, despite all refusal. This also applied to the youngest, such as the five and six year old daughters Josepha and Johanna.

The mother herself enjoyed herself exceptionally well at spiritual pilgrimage sites, for example at Melk Abbey in Lower Austria, where 587 pounds of beef, 743 pounds of veal, 23 hares, ox tongues, carp and many other delicacies were served for the empress’s visit. The table was set in the monastery’s own Prelate’s Hall for 40 people of the highest rank, together with the other guests, who were seated at 17 other tables. Incidentally, the monastic school of the monastery designated it a so-called gymnasium publicum in 1775 – thus enabling a large number of students of the school, which still exists today, to receive an excellent education. Piety and education thus went hand in hand! 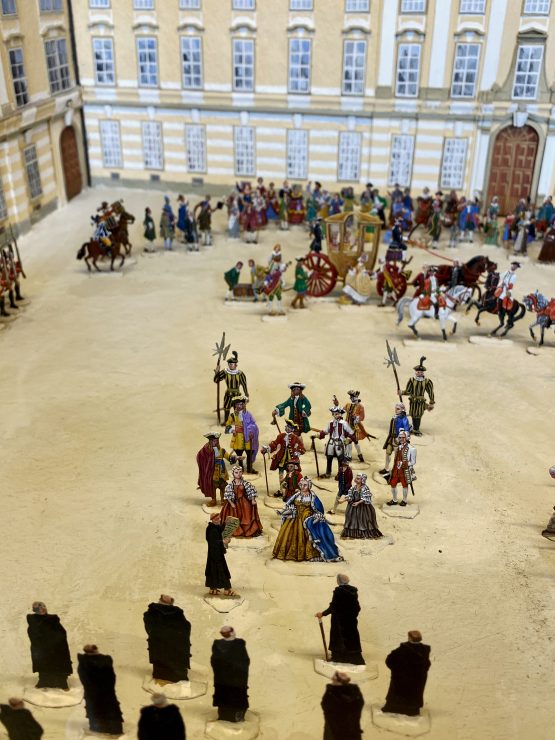 For the Habsburgs, pilgrimages were always a very big issue: they represented publicly practiced sacred acts that were performed anew every year. For example, Maria Theresa went on pilgrimages to Klosterneuburg, Mariazell, and of course to the sacred sites of Vienna. She always made sure that she did not favor any religious order; rather, on the feast days of the religious saints, she visited the Augustinians, the Dominicans, and the Scots in turn – it was Maria Theresa’s motto to bring joy to as many religious brothers and sisters as possible. The Viennese Diarium always reported on this, and of course the empress’s pilgrimages and church visits were recorded in magnificent copperplate engravings for publicity. Valuable pieces from the Habsburgs’ ecclesiastical collection can be found in the Vienna Ecclesiastical Treasury, which is more than worth a visit during a stopover in the capital!

Maria Theresa’s favorite daughter Marie Christine, called Mimi, was already mentioned in my last article. Together with her husband, Albert of Saxe-Teschen, she resided in Bratislava, which at that time still belonged to Hungary. One of the most important spiritual sites of the country is undoubtedly the Benedictine Abbey of Pannonhalma. Perched imposingly on Martin Hill, the monastery is still inhabited by Benedictine monks today, and was once even visited by Mimi’s mother herself! Absolutely worth seeing is the library located in a classicist hall. It may be assumed that Mimi and Albert also entered the monastery themselves, which is located only 100 km from Bratislava.

Today, the heart of her descendant Otto of Habsburg-Lorraine, the last heir to the throne, is buried in the crypt of Pannonhalma. Archduke Michael of Habsburg-Lorraine had this crypt built in 2009. Otto’s heart is one of the few exceptions in terms of burial place: Conventionally, the hearts of the Habsburgs, including that of Marie Christine, were buried in the Loreto Chapel of the Augustinian Church in Vienna, in the so-called Herzgruft. It was precisely above this crypt that Albert of Saxe-Teschen had a large monument erected to his wife, which is one of Antonio Canova’s major works. 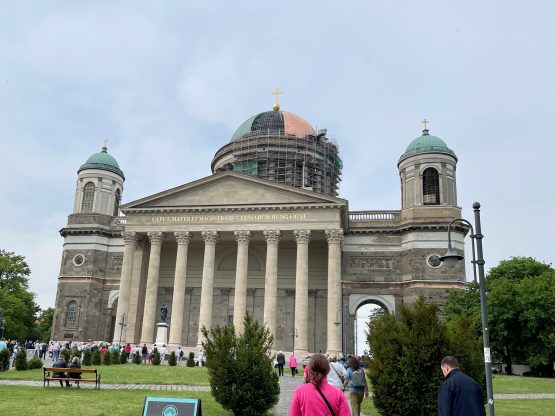 But further on our route: From Pannonhalma we go to the Basilica of Esztergom, the former seat of the Hungarian kings and thus of the ancestors of Maria Theresa and her daughters! As the cathedral of the country’s primate, it is also the first church in Hungary. The first Hungarian king, Saint Stephen, was crowned in Esztergom, so the place and the church were certainly covered in the lessons of the archduchesses. For visitors, the Esztergom Castle Museum revives the Hungarian monarchy with its numerous exhibits.

But the Habsburg connections did not stop there: Maria Theresa was crowned Hungarian queen by none other than Imre Esterházy de Galántha, the former archbishop of Esztergom and prince primate of Hungary, in Bratislava on June 25, 1741. On her head, of course, was placed the Crown of St. Stephen – the very crown that St. Stephen himself once wore. During a tour of the breathtaking basilica, you can breathe in the imperial-royal air through and through!

The Habsburgs and the Divine Grace

Like her ancestors, Maria Theresa saw herself quite conservatively as having been appointed ruler by God. The justification of her power as ruler was therefore not before her subjects, but before God. She was a convinced Catholic, so that, for example, persecutions of Protestants were unfortunately commonplace under her rule. However, she took a step in the direction of the Josephinian state church in that she placed the church under the supervision of the state. It can thus be summarized that she proceeded from the divine grace of her father, Charles VI, and slowly but surely led the Habsburg state into a monarchy characterized by modern state principles.

The Slovak Basilica of the Seven Sorrows of Mary in Maria Schoßberg (Šaštín) was certainly still on the agenda of the imperial-royal archduchesses. None other than Maria Theresa and her Francis Stephen consecrated the church – again accompanied by the Bishop of Esztergom – in 1736. Mimi, too, would have known and appreciated it, as the basilica is one of the most important in Slovakia, which used to belong to Hungary. The church is only about 65 km away from Bratislava, which makes it an ideal destination for Mimi and Albert, but also for all those who want to follow in the footsteps of the Habsburgs. When the largest organ in Slovakia sounds, one feels transported back to times long past amidst the baroque interior.

The 18th century created numerous baroque splendors for us travelers to explore in the former k.&k. monarchy. In our largely non-Christian world, some of the spiritual views of the Habsburgs around Maria Theresa may be foreign to us, but it is all the more exciting to put ourselves in the place of former ways of thinking while wandering through old walls. Many a visit to a place of worship opens up new perspectives that allow us to experience foreign (Habsburg) times in an inspiring way.