News from the Ancient Romans at the Danube Limes

Along the Road of Emperors and Kings there were legionary camps, forts, watchtowers, settlements and even a few real cities in Roman times. What was life like for the Romans in our latitudes between Regensburg and Budapest? So much different than today?

There have been quite a number of things happening along the Danube. Anyone who chills in the sun on Vienna’s Danube Island, sails through the Wachau by boat or strolls along the Danube promenade in Passau and Budapest could close their eyes for a moment (watch out for the cyclists!) and beam themselves back 1,800 years: To the Romans and their everyday life in Raetia (eastern Bavaria), Noricum (today’s Austria) and Pannonia (Hungary) and “their” Danube back then. The Danube could tell a lot about the time when it was still a wild, meandering border river to the barbarians, a customs border area with monumental forts and watchtowers, and where military fleets lay at anchor.

No cool bars, beach resorts, dog zones and Danube restaurants – but the ” Wet” Limes, as the Danube was later also called – was an external border to the unloved neighbours, but also an important customs border where not only fighting but also lively trade took place. The road along this Danube border, once called Via Istrum (the Danube Way), still exists today somehow: the Via Istrum of the Romans of yore is today, roughly speaking, our B1, the federal road between Vienna and Linz, and the Limes was thus the ancient precursor of the Road of Emperors and Kings.

How can one imagine Roman life in those days in a town along the Limes?
Were the “ancient Romans” only about fighting, discussing and “bread and games”?

Let’s sit for a while on the Danube promenade in Passau, Vienna or Budapest or look down from the Bratislava UFO Tower or the Devin ruins onto the river, which has experienced more than we will ever know about it. What has been handed down? 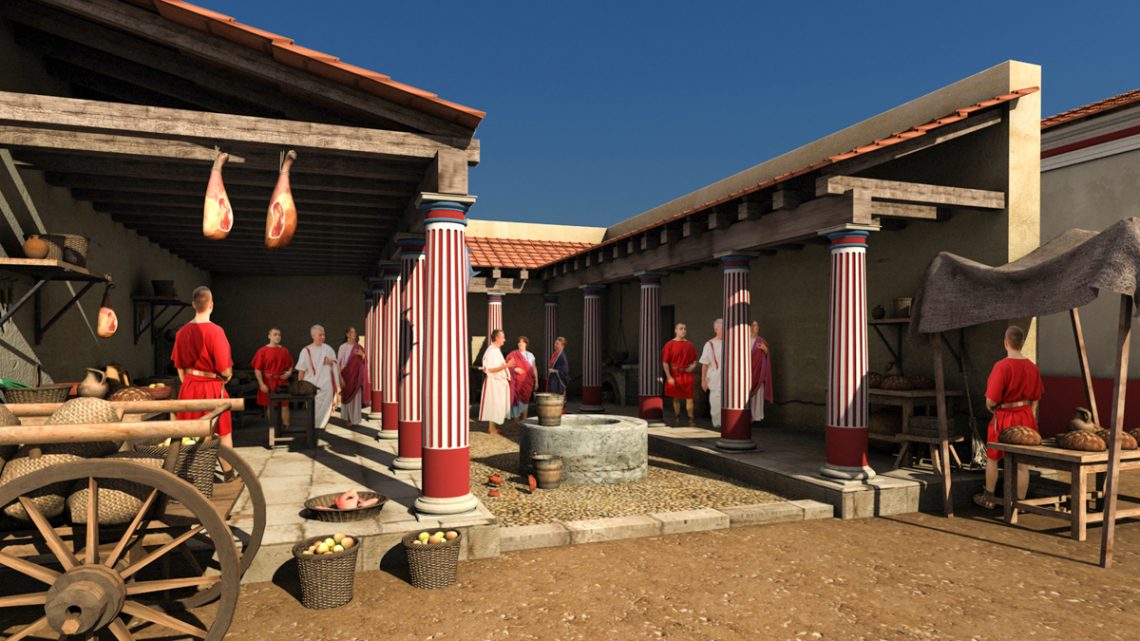 News from the Roman cities

In addition to the military camps and relief camps along the Danube Limes, there were always civilian camps. Real life took place there, so to speak: With entertainment, markets, brothels, barbers and whatever else was needed for daily life. Or the villages near a military camp profited from the local military and grew, also economically.

Things were not that different from today’s cities in these large and small towns of the Roman Empire. Here, too, people went to the theatre, to school, to the hairdresser and to the beautician. People drank fortified wine, had fasting cures with starvation days prescribed for them (even intermittent fasting, as it is so fashionable today, was known for a long time) and those who had a particularly large villa and many slaves sometimes flaunted it to their friends like a new smartphone.

Gladiators were more or less the YouTube stars of today, had stage names, many followers (followers and fans) and there were indeed fan articles. Gladiators were particularly revered and idolised because of their masculine charisma. Actors, on the other hand, were not as highly regarded as they are today, were considered “dishonourable”, but despite this, or precisely because of it, sometimes had a huge troop of admirers behind them. We know enough of that today, too. It was similar for the charioteers in the Circus Maximus: screaming fan communities were not uncommon back then.

People gossiped at the hairdresser’s and if someone shaved particularly badly, word spread quickly. Donkey’s milk was considered the anti-aging serum par excellence. In general, the ideals of beauty were similar to those of today: white teeth and a distinguished, slightly swaying gait on the part of women were probably well received by the men. Just as today, body hair on women was considered unattractive elsewhere than on the head. Women were also expected to have a light complexion, while men were allowed to get a good dose of sun in order to appear masculine: The term “shade seeker” at that time was probably meant as derisively as our “shade parker” today. The children were taken to school by educated slaves (instead of au pair girls) and often bought a snack “on the go” on the way because there was no time for it at home.

Do we need any more parallels to today? More news from the ancient Romans, while in today’s world we hang out by the Danube, walk the dog, fry in the sun and show off our tattoos? Speaking of tattoos. The educated Romans didn’t like them at all, they were considered “barbaric” – Cicero, for example, was enraged by the body paint of some bathers and had to write one of his many letters of complaint about the decay of morals. And pets? Of course, the Romans had them too: first and foremost, of course, was the dog, which on the one hand was allowed to act as a guard dog, but on the other hand could also be used as a lap dog. Because cats were unknown for cuddling, they only served in the house as mouse hunters. Birds were also popular, but only educated ones: they had to be able to parrot at least a few words and impress any guests with them. There were vegetarians and vegans – partly voluntarily (because of Pythagoras) partly involuntarily (because meat was expensive) and real meat tigers preferred to eat pork or chicken.

Did the ancient Romans go on holiday? Yes, when they were rich – but a river cruise on the Danube would have “hunted” people back then; boat trips for entertainment or recreation did not hold any fascination for people back then: Too dangerous and far too uncomfortable. The ships in our latitudes at that time were mostly freighters or military vessels. When Roman citizens travelled, it was not for beautiful landscapes or nature experiences, but solely for culture. Athens, Delphi, Ephesus, Corinth or Egypt and Alexandria – these were the dream destinations of a rich and educated Roman.

The largest city in the Roman Empire was Rome, which may have had about one million inhabitants in its best days. Carthage had 300,000, Ephesus 100,000 and Cologne about 50,000 inhabitants. In Rome there were daily pedestrian jams and traffic jams. Caesar had even imposed a daytime ban on carts – lorries and touring cars were not allowed to enter the city during the day – does that sound familiar? From Salzburg, Hallstatt or Tyrol, for example? Even back then there were botched construction projects, floods, youth gangs and bad air in the city.

From Regensburg to Budapest, along the Danube and thus the Limes, there were several ancient, genuine large cities of the Roman Empire, such as Regensburg, Enns, Wels or Budapest. Carnuntum , too, was a large civilian city with all the trimmings, in addition to being a military camp. Here at the Rhaetian or Pannonian Limes, we didn’t have to deal with the problems of large cities like in Rome, but Carnuntum, with the rank of a “Colonia”, had 50,000 inhabitants and a size of 10 km² in its heyday.

With a lot of imagination we can imagine all this today, but even better we can immerse ourselves in the Roman Empire here at the Danube Limes and the Road of Emperors and Kings by means of modern, multi-dimensional media. A large number of Roman museums between Regensburg, Passau, Vienna and Budapest make it possible: the remains of the archways, forts or watchtowers can be viewed three-dimensionally and displayed on your smartphone. Or as in Carnuntum: walk through an authentic Roman house on Roman underfloor heating, warm up in a heated thermal bath with wall paintings and take part in a Roman festival. Since autumn 2019, you can also walk in the virtual footsteps of the Romans in Tulln – with a completely new app called Virtuelleum on your smartphone, a walk through the city even becomes three-dimensionally Roman.