The High Life on the Route of Emperors and Kings

Part Two: From Vienna to Regensburg

It is less than twenty kilometres from the Hapsburg metropolis of Vienna to Klosterneuburg. Founded in 1114, the abbey is regarded as the cradle of Austria, which in the 18th century had become an influential player in European, if not world politics, as a result of the effusive Hapsburg politics of power and marriage. Wanting to erect an everlasting monument to his triumphs, Emperor Charles VI (1685-1740) ordered that the monastery be expanded to a revolutionary new residence with its own imperial apartments. In addition to the retirarde, or private rest area, the suite constructed for the ruling family included an audience chamber, dining room and red salon.

‘Thrift’ was not in the sovereign monarch’s vocabulary, at least when it came to Klosterneuburg Monastery – probably much to the delight of the architects, plasterers and painters who were given the opportunity to decorate the imperial wing with decorative plaster work and virtuous wall paintings. The imperial family enjoyed visiting at least once a year after moving to Klosterneuburg with their daughters Maria Theresa, Maria Anna and Maria Amalia, temporarily residing in the monastery.

Klosterneuburg Kaiserzimmer © Alexander Haiden
Schönbühel: A castle complete with a school and church

Schönbühel Castle in the Wachau valley market town of Aggsbach dates back to the same time as the famous monastery. Marchwardus de Schoenbuchele had it built in the early 12th century atop a rock 40 metres high where it seems that a Roman fortress once helped secure the Empire’s border. Over the next 200 years, the Schönbühelers, who were visibly working towards the common good, extended their imposing presence with a church and a school. Once the dynasty ended, the castle fell to a nobleman with the fairytale name of Conrad von Eisenbeutel and shortly thereafter to the Melk Monastery, which sold it on to the Starhemberg family in 1396. It remained in their possession for the next 400-plus years.

In recent years, however, the Starhemberg family evidently had more important things to do than take care of the property in the Wachau valley. In 1819, Ludwig Josef Gregor von Starhemberg left the castle, together with the ruins of the castle of Aggsbach, which was also part of the Starhemberg real estate portfolio, to Count Franz von Beroldingen. The count did a fantastic job renovating and rebuilding the by now largely dilapidated Schönbühel Castle in just two years. During the general overhaul of the tower, castle church and the three-towered residential area, Beroldingen renounced the neoclassical zeitgeist in favour of late baroque taste, though he left the main portal as it was, decorated with a panther’s paw, a sword draped in laurel and a crescent dedicated to Ernst von Starhermberg’s meritorious service in the liberation of Turkish-occupied Vienna. Today, the castle, including sustainable agriculture and forestry, is maintained by the joint stock company Schlossgut Schönbühel Aggstein. 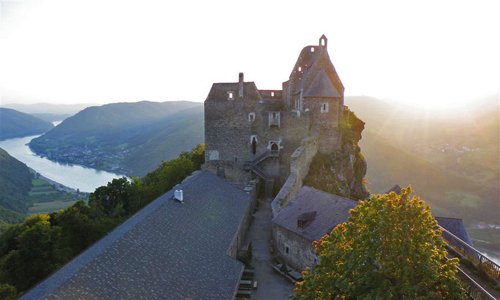 Two great gems of the baroque period can be found in both geographical and stylistic proximity here: in Dürnstein, the baroque cellar castle built in 1715 by master architect Jakob Prandtauer at the foot of the famous wine-growing region of Kellerberg; and in Persenbeug, the baroque castle of the same name, which remains under Hapsburg ownership to this day and, as it is private property, is not open to the public. A veritable disaster in the castle nearly cost German Emperor Henry III his life in 1045: At a banquet, the floor of the great hall collapsed under the weight of the dinner table and its guests, who fell along with their ruler into the hole below. Like Henry III, many other emperors and kings made their way through here or the castle across the River Ybbs.

In the Strudengau region, which adjoins the Wachau upstream, the exquisitely appointed Greinburg Castle conveys a noble sense of savoir vivre. Grein’s most famous landmark is the oldest residential castle in Austria. For almost 200 years, its lords and ladies have been the dukes and duchesses of the House of Saxe-Coburg and Gotha, enjoying plenty of living space in the four wings of the three-storey building. Columned renaissance corridors make it possible to take a walk in the fresh air, remaining dry even when it rains. Greinburg’s two great halls are available for larger gatherings, including a special gem – the Sala Terrena – on the ground floor: Mosaics made from thousands of Danube pebbles adorn this grotto-style hall with a finely-cut diamond vault, which was the setting for amorous tête-à-têtes during the rococo era as well as for theatrical performances.

Clam Castle, located not far from Grein, is similarly steeped in history. The Rock’n’Roll Circus has been pitching its tents at its feet for a few summers now. It can boast of being the only Austrian castle that has been inhabited by a noble family since its construction more than 550 years ago. Count Clam-Martinitz represents the 23rd generation of the dynasty, which has made the castle more and more comfortable and well-equipped. The house features access balconies and comfort rooms as well as its very own pharmacy, and holds a collection of precious Meissen porcelain.

It’s hard to guess that Ennsegg Castle on the River Enns once served as a fortification on the border between Upper and Lower Austria. The legacy of the castle’s early lords as enthusiastic aesthetes lives on its current function as a wedding venue for couples in Enns. The castle’s ceremonial hall is used by Austria’s oldest city to hold civil ceremonies, with the gold leaf panelling nestled among delicate pastel parchment wallpapers making these particularly festive occasions. An equally splendid atmosphere can be found a little further along at the Augustinian monastery of St. Florian, which traditionally served as a travel lodge for Austrian emperors. Carlo Carlone and Jakob Prandtauer carried out its baroque reconstruction, which involved the creation of 14 plastered imperial rooms for the first family and their entourage. The wall hangings as well as the furniture are among the best that money could buy at the time.

Schönbühel Castle and the ruins at Aggsbach were not the only properties owned by the von Starhembergs along the Danube. Much more important was and remains Starhemberg Castle, situated in Eferding’s town square. Apart from a brief period of interruption in the 17th century, the castle has been under Starhemberg ownership for more than 450 years. Today, Georg Adam, Prince of Starhemberg, runs a family foundation for its preservation. It was the counts of Schaunberg who bought their official residence in Eferding from the bishopric of Passau in the 14th century and began furnishing it. As an heirloom, the castle was passed on to later Starhembergs, who added additional upgrades and transformed the ruins into a classicist residential castle over time. Part of the house is open to the public as the Princely Starhemberg’sche Family Museum, which allows visitors to get an in-depth look at the life and lifestyle of the Austrian nobility. Its prized features include the Renaissance-era coffered ceilings (commissioned by Count George III von Schaunberg), a monumental tiled stove, set in 1580 by Linz-based master stove-fitter Paul Zilpolz and the plaster-framed ornamental mirrors. As is typical in museums, some of the building’s most beautiful pieces used to be housed elsewhere: The intarsia ceiling in one of the halls, dating back more than 400 years, comes from Hartheim Castle, which was long held by the Starhembergs. And the castle’s carefully restored organ once stood in Linz’s Old Cathedral Dom until about 50 years ago. In all likelihood, it would have been played there by Anton Bruckner. 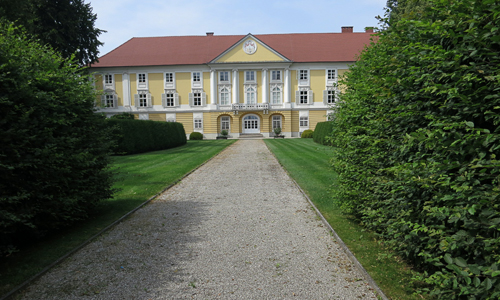 As is the case with Eferding Castle, Obernzell Castle, built on an artificial island on the Danube, would be nothing without the Passau clergy. The prince-bishops of this three-river town built the moated castle in the 16th century to serve as maritime traffic control. In an unbridled bow to modernity, even considered to be avant-garde for their time, they later transformed the structure into a Renaissance castle. With humanistic and religious quotations in the theological world languages of Greek, Latin and Hebrew, the decorated walls of the great hall testify to the broad spiritual horizon of the Bavarian aristocracy – and the material wealth of Obernzell as a whole. 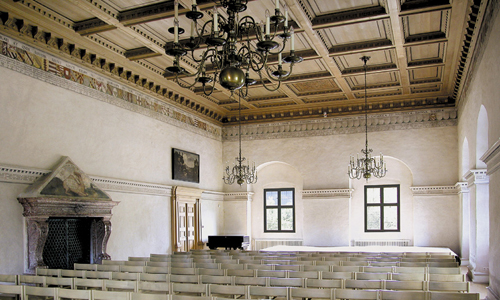 At the intersection of capital, clergy and nobility lies the former abbey of St. Emmeram in Regensburg. In 1812, the aristocratic Thurn and Taxis family, which had always been entrepreneurially successful, was granted the monastic buildings by the Kingdom of Bavaria as a sort of consolation for the abolition of the postal monopoly that had made the family their fortune. The family used part of this fortune to transform the monastery into a castle residence – now one of the most beautiful in Europe. As Princess Gloria confided to Vanity Fair, when she was first led through her future home in 1979, it took four hours to view to the most important parts of the property: the Yellow Salon with its baroque interior; the Silver Salon, which was furnished to the tastes of Sisi’s sister, Duchess Helene in Bavaria; the Green Salon designed by Walhalla architect Leo von Klenze; the Marstall Museum in the old riding hall; and much more, which remains inaccessible to mere mortal visitors to the castle. Taking a stroll through Princess Gloria’s Portrait Gallery, visitors are guided through St. Emmeram by pop nobility in the form of Michael Jackson, Mick Jagger, Quincy Jones and Elton John. 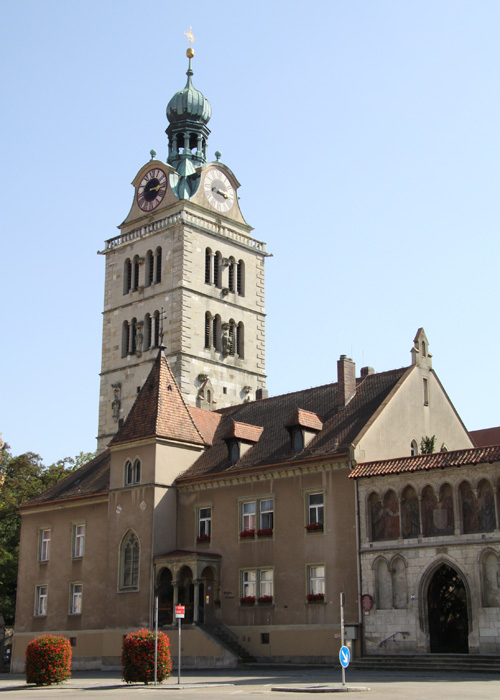