The Perfected Art of Living

The High Life on the Route of Emperors and Kings

The Perfected Art of Living – Part One: From Visegrád to Vienna

As a political force, nobility has virtually no significance in today’s digital democracies. Yet its dignified way of life, cultivated over centuries, still holds a more or less secret fascination for us. Among other things, this attraction is embodied by the perseverance of the noble titles and predicates, such as the distinguished “von”, though they have long since been abolished by law. Still, the weal and woe of the European aristocracy provides indispensable content for more than just the yellow press, and a live television broadcast of a royal wedding is still a huge draw for viewers. 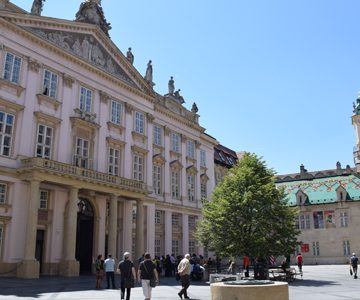 This is not only down to the discreet charm of the aristocracy. First of all, the counts, barons and grandchildren of today’s kings and queens are a living expression of the collective past. Few families can trace their history from the crown of the family tree to its roots, as is the case for most of the nobility, who are distinctly aware of their own dynastic legacies.

Nobility still stands for more than just living tradition. Specifically, it stands for a refined way of life and the ability to attach a carefully cultivated outward appearance to their lives. The noble art of living consists of a balanced relationship of indulgence and self-control, of reason and sensuousness, of refinement and simplicity. Just how much the courtly way of life still holds its charm is evidenced not least by the multitude of places offering upscale hospitality, especially those that include the word “Hof” in their name, at least in German-speaking regions.

Thanks to their extensive education and sophisticated taste, many nobles along the Route of Emperors and Kings have always been able to walk the fine line between luxury and extravagance. The similarly understand that they are surrounded with beautiful and enduring things, and that they must foster values to last for generations as evidenced by the numerous testimonials to the high life on the Danube. It was primarily the nobility who established the line of monasteries, castles and artistic treasures along the Danube like pearls on a string. They are a testament to the nobility’s intellectual ability to think in generations and to use the resources available wisely in order to preserve them – and ideally grow them – for their descendants. Be it by aristocratic families sustainably cultivating their estates in the most modern sense, strategically marrying off their children or having them build careers in the church, in administration and in the sciences.

One of these grandiose testaments to this way of life is the ‘high castle’, which gave the lovely Danube town of Visegrád its Hungarian name. Proudly situated 250 metres above the Danube, the popular King Matthias Corvinus (1458-1490) transformed the existing Gothic building into a Renaissance-style double palace: One palace was reserved for his Italian wife, Beatrix, and the other for himself. The courtyard chapel lay in between in gardens that stretched from each terrace to the banks of the Danube and were supplied by a sophisticated irrigation system. This ‘heaven on Earth’, as the royal home was reverently called, offered more than 350 elegantly furnished rooms, including a formal inner courtyard and reception court. The Hercules fountain, made of red marble, has been lovingly preserved.

Upstream in nearby Bratislava, the remarkable number of aristocratic palaces testifies to the high life cultivated by the nobility: The Palace of the Hungarian Royal Chamber and the Primate’s Palace, as well as the stately townhouses of the Ballassy, Pálffy, Esterházy, Erödy, Zichy and Grassalkovič families. The statue of Franz Liszt in Keglevich Palace symbolises the artistry of upper Bratislava society. Babette von Keglevich supported the Hungarian piano virtuoso, composer, conductor and dramatist as a generous benefactor.

Between Bratislava and Vienna, the Danube flows through vast, floodplains rich in game, where the Hapsburgs, enthusiastic hunters all, stalked their prey on huge swathes of land. In Vienna, the heart of the Empire, travellers will encounter the architectural high life at almost every turn.

One of the dynasty’s predecessors, Henry II, Duke of Austria, called Jasomirgott based on his favourite turn of phrase, “Joch sam mir got helfe” (“Yes, so help me God”), turned Vienna into a royal residential city in the 12th century. As a great and knowledgeable friend of the arts, Jasomirgott provided a shining example of exquisite patronage.
At the Viennese court of the Babenbergs, which their guest Walther von der Vogelweide proclaimed to be ‘delightful’, the best minstrels would follow one after the other through the door of the audience chamber, including poems by the best of the best: Reinmar von Hagenau and Neithart von Reuenthal, as well as the anonymous author of the Nibelungenlied. Ulrich von Lichtenstein even caused a sensation by appearing as a drag queen and rode into the city as Venus to the applause of the ladies of the court in 1227.

As was the case elsewhere, the nobility in Vienna sought to be close to court and, above all, settled in Herrengasse. The sheer number of palaces along this road, which is just 430 metres long, is second to none. Their names read like a who’s who of the old Austrian high nobility, coming and going. At Batthyány Palace, for example, which was built by the Orsini-Rosenbergs, the ageing ‘noble knight’ Prince Eugen of Savoy used to play whist with Eleonore, Countess of Batthyány, known as ‘Beautiful Lori’. Some of the palaces are now at least partially open to the public, especially since many of them are now government buildings and offices.

Also open to the public are large parts of the nearby Hofburg, which served as the residence of the Hapsburgs for more than 600 years. However much imperial royal life was subject to the fashions and the spirit of each epoch, there is nowhere better to see it than here: Nearly every ruling family had the castle rebuilt and expanded according to contemporary tastes.
Half a millennium of construction work transformed the palace into a labyrinth of no less than 2,600 rooms, courtyards, gardens and stables, where people unfamiliar with the surroundings would inevitably lose their way.

The fact that the Hapsburgs were also very fond of the arts is demonstrated by the Vienna Hofmusikkapelle. Founded in 1498 by Emperor Maximilian I, the ensemble with members of the Vienna Philharmonic Orchestra is Europe’s oldest.

For a time, Empress Elisabeth was ensconced in the Hofburg’s Amalienhof apartment, named after the widow of Emperor Joseph I, who lived here for 31 years. Among other things, she added a chin-up bar and other gym equipment to help her keep her figure. Her husband, Franz Joseph, had his own apartment adjacent to hers. As magnificent as the throne rooms where he received four-million visitors during his tenure were, his private rooms were (and remain) spartanly furnished.

Even more than the palace at the Hofburg, Schönbrunn Palace – a former summer residence of the House of Hapsburg – is an expression of an imperial sense of life. The former hunting ground of the Hapsburgs got its name when Emperor Matthias saw a natural fountain in 1619 and is said to have exclaimed, “Welch’ schöner Brunn!” (“What a beautiful fountain!”). A castle was built on the grounds of Schönbrunn for Empress Eleonora Gonzaga between 1638 and 1643, which, after sustaining heavy damage during the second Turkish siege, was then transformed into a glamorous hunting lodge and summer residence by Johann Bernhard Fischer von Erlach. The size of the large royal household was hard to grasp during the high season.

The estate took on its present dimensions under Empress Maria Theresa. With its 2,000 rooms, Schönbrunn can almost compete with the palatial magnitude of the Hofburg. Each of the ten imperial children was given five rooms. The ruling family employed some 1,000 servants. Game fish were bred for the imperial table in ponds and streams, and the kitchen employed no less than 56 cooks – exclusive bakers, cellarmasters, butchers and people tasked with setting the table. 200 bodyguards ensured the family’s security. 140 musicians provided the court society with entertainment, and as for literature, a German and an Italian court poet were employed. Among the composers to dazzle the court in Schönbrunn were Leopold Mozart and his six-year-old child prodigy Wolfgang Amadeus, who cheekily kissed the monarch, Maria Theresa.
Schönbrunn’s zoo was also established around this time in 1752, making it the world’s oldest zoo.

The Hapsburgs indulged their passion for hunting – as did their Babenberg predecessors – in the Lainzer boar garden located in Vienna-Auhof. Emperor Ferdinand I bought it in 1561 and had it fenced off. The density of its game population meant it was considered “the grandest wildlife park in Europe”, even under Maria Theresa’s father, Charles VI (1685-1740). In 1855, Emperor Franz Joseph I ultimately brought it under state ownership as the “Lainzer Tiergarten” and had Hermesvilla built as a refuge for his wife Elisabeth in the early 1880s – with rather amorous ulterior motives, as revealed by the bedroom completed by famous decorator and historical painter Hans Makart with motifs from the erotically charged “Midsummer Night’s Dream” by William Shakespeare.