From children's weddings and power politics to p(r)unk and glory: Marriage with calculation

In spring 500 years ago – in 1521 – the Imperial Diet of Worms took place: Emperor Charles V. had convened it, a gigantic “event” one would say today, during which the city was actually in high spirits. The 10,000 guests as well as the locals (at that time about 7,000) celebrated day and night and ignored the fasting time as well as most of the otherwise well suffered “good customs”. A highlight during this time for the pro-Lutheran inhabitants was probably also Martin Luther’s meeting with Emperor Charles V.

In addition, there were also internal discussions between the brothers Charles and Ferdinand. At the Imperial Diet of Worms, for example, they discussed a suitable location for an urgently needed wedding – and not just any wedding. But one that would have far-reaching consequences for the development of the Habsburg monarchy for several hundred years.

Already at the “Viennese double wedding” in 1515, the then Emperor Maximilian I. had taken the precaution of marrying Anna Jagiello of Hungary and Bohemia, at that time already 12 years old and a native of Buda, as a kind of proxy for a later bridegroom among his grandchildren who seemed adequate to him. 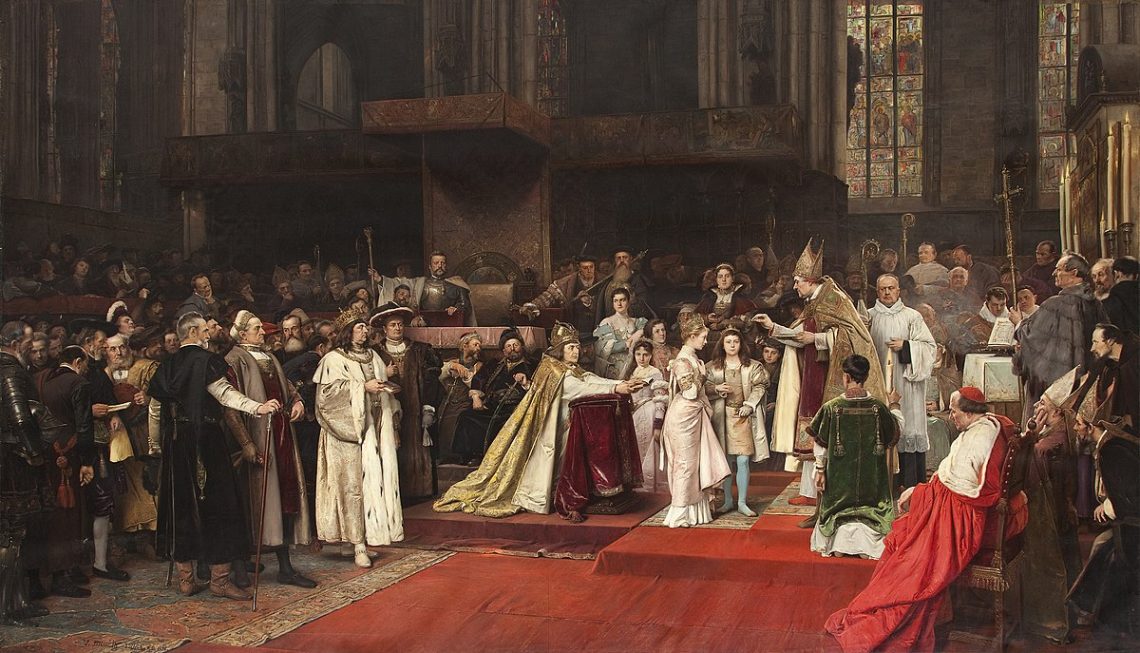 In the political calculations of those in power, child marriages were a common means of planning the long-term distribution and expansion of power.  So 10-year-old (or even younger) children at the altar were a common sight. In the following three generations, such arranged marriages laid the foundation for Habsburg power in Europe.

Finally, grandson Charles V carried out the request by giving Anna from Buda to his brother, the later Emperor Ferdinand I, as a wife. And this offer was planned by the brothers in Worms: When they discussed the location for this historic wedding, they were perhaps not too different from today’s wedding planners. The location of the wedding had to be strategically, logistically and travel-wise easily accessible, because the guests came from all directions. Linz, Wels or Innsbruck as a location – that was the question at the time. It became the Linz wedding, which was to strengthen the power of the Habsburgs once again and for many centuries to come.

Wedding stagings once and now 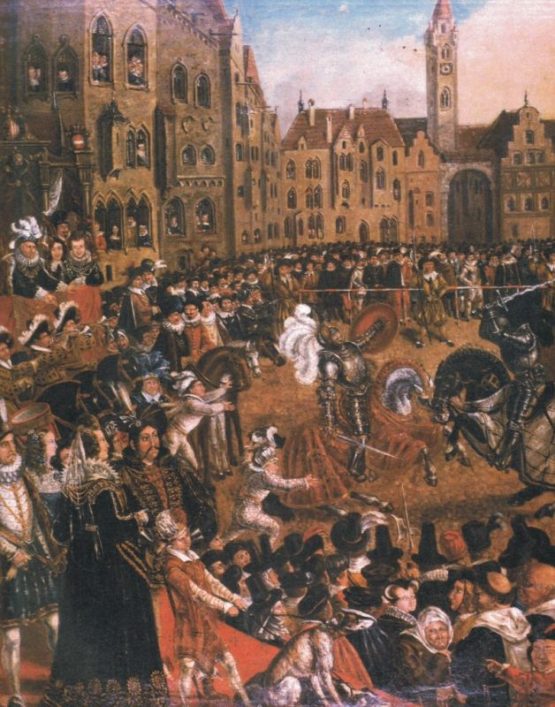 Today, a big wedding would probably have been preceded by “only” months of planning, but at that time it had actually been years of diplomatic moves, the strings of which had already been held in Maximilian I’s hand.  Linz finally hit the jackpot because it had already been a highly active and much-visited ” trade fair city” 500 years ago, was conveniently accessible by water and was relatively safe.

Linz thus became the scene of the aforementioned “Linz wedding”, which the groom had to tackle directly from Worms quasi diretissima: In Regensburg, of course, they changed to the ship – Anna, in turn, traveled from Innsbruck to Passau and embarked there. Destination: the Linz wedding on May 26, 1521 in the parish church of Linz. To the amusement of the masses, the “Losenstein Tournament” was held on the town square in the middle of Linz on the occasion of the wedding, an event that caused a great stir: a Spanish grandee challenged the local Sebastian von Losenstein to a fight – the tournament square was filled to bursting with onlookers.

The marriage turned out to be surprisingly happy for the times and considering the political calculations. When Anna’s brother Louis II died at the legendary Battle of Mohács, this made Anna’s husband king of Bohemia and Hungary – the foundation stone for 400 years of Habsburg rule in Bohemia and Hungary was laid. Even if in the meantime the Ottomans asserted their claims to Hungary (and by means of two Turkish victories also to Vienna), the right of the Habsburgs to the crown was thereafter accepted by the Hungarian estates nolens volens.  The Hungarians allegedly still say in the case of misfortunes (or what they consider to be misfortunes): “Több is veszett Mohácsnál” (“More was lost at Mohács”) – a trauma for them even today.

Who would have thought that this far-reaching political development had its origins in Linz on the Danube?

Wedding, Marriage and Power Politics of the Habsburgs

Marriage political intrigues were a matter of course until the emergence of nation states at the end of the 18th century. Women were sought-after commodities, infants were sold and even babies were traded on the marriage market. In some cases, repulsive intra-family intrigues arose, which today would simply be called “inbreeding. Ethical concerns or even fear of hereditary diseases did not occur to anyone, quite the contrary.

Grotesque manifestations of this were, for example, the quite common “marriage of the procurationem” (a representative of the groom, who was not present at the time, stepped in on the wedding night) or strange-seeming ritual potency tests on virgins. The wedding per procurationem was a welcome “tool” for Maximilian I in all three of his marriages designed on the drawing board – he made use of it each time in order to be able to carry out his strategic plans despite his absence.

Emperor Franz Josef was also married to his direct cousin Elisabeth of Bavaria. The fact that he was to be properly paired up in Ischl, first with his cousin Néné, officially declared by the empress’s mother and her sister, was not a problem when it came to making suitable alliances. On the contrary, when his choice fell on the younger sister, the matchmakers were initially “not amused,” but a cousin is a cousin: Elisabeth’s bridal journey across the Danube toward Vienna was like a triumphal procession on water and on land, and people from all walks of life were (initially) enthusiastic about the young empress-to-be. The close relationship between the bride and groom within the family was even romanticized rather than criticized.

Anna and Ferdinand, Sisi and Franz Josef: despite the arranged marriages, the relationships were characterized by affection, an exception to the Habsburgs’ skillful wedding planning. 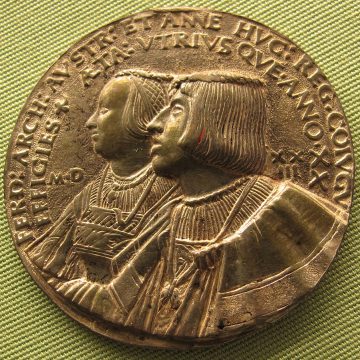 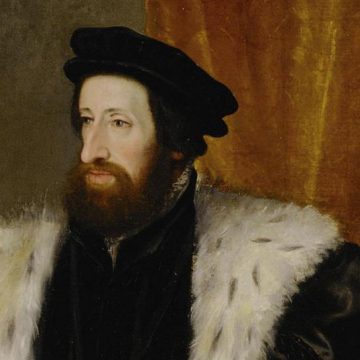 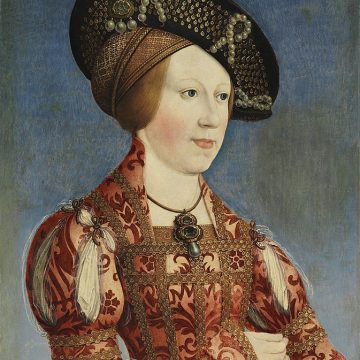 So that’s how it can go with “high times” when your names are Ferdinand and Anna and you write the year 1521. Change of scene, a good 450 years later – again on the Danube.

May 31, 1980, at the Emmeram ancestral palace of the Thurn and Taxis near Regensburg: there is media hype and modern pomp surrounding a modern noble fairy-tale wedding. An ancient noble family, the haute volée of Central Europe and a whole lot of blue blood: Mariae Gloria Fer(di)nanda Joachima Josephine Wilhelmine Huberta Countess of Schönburg-Glauchau marries Johannes Baptista de Jesus Maria Louis Miguel Friedrich Bonifazius Lamoral Prince of Thurn and Taxis to great international media interest. Of course, such a marriage does not take place in a small, quiet setting, but with pomp and a golden carriage, with a Valentino designer dress and a glittering tiara for the twenty-year-old bride.

At that time, 500 years ago, as well as in 1980, dynastic reasons and succession considerations played a not inconsiderable role. The modern bridegroom, Prince Johannes, was probably also interested in having a lineage holder – according to reports, he himself consulted the family tree and the family history of the later Princess Gloria von Thurn und Taxis before the engagement. The family tree apparently delivered what it promised, and the prince also got what he wanted through the marriage: three children – two princesses and a prince – were the result of the marriage.

Today, Princess Gloria still manages the assets of her husband, who died 10 years after their marriage, and has representative duties for the Thurn und Taxis family. She has long since shed the sometimes garish (punk) outfits of her early years: Entrepreneurship was and is in demand in such a family business. 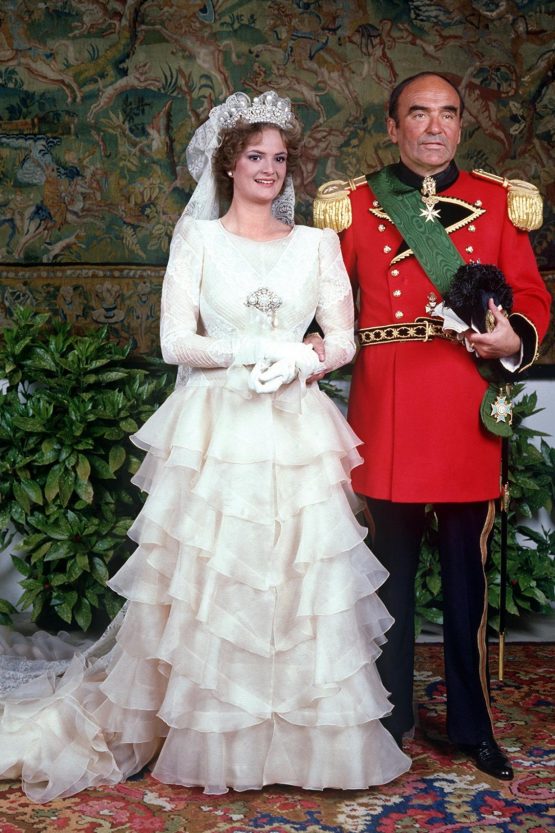 If you feel like it, by the way, you can order an autograph card of Princess Gloria online, quite simply via the (by the way, very up-to-date and well-designed) website of the von Thurn und Taxis family.

Incidentally, the last Habsburg wedding in modern times was not long ago either: Eleonora von Habsburg, the daughter of Francesca and Karl Habsburg-Lothringen (grandson of the last emperor of Austria, Emperor Karl – the great-nephew of Emperor Franz Josef) married a commoner in 2020. In pandemic times, even she was not spared wedding date problems. The nobility of today struggles, at least in terms of organization, with problems that we non-blue bloods also have today.

Read more: A yes with noblesse, weddings on the road of emperors and kings, inc. Marriage tips on the Danube in Upper Austria.