Necessary
These cookies are necessary to run the core functionalities of this website, e.g. security related functions.
Statistics
In order to continuously improve our website, we anonymously track data for statistical and analytical purposes. With these cookies we can , for example, track the number of visits or the impact of specific pages of our web presence and therefore optimize our content.
Marketing
Marketing cookies come from external advertising companies and are used to collect information about the websites visited by the user.
Budapest © Budapest Tourismus

Empress Elisabeth and the Danube - From Bavaria via Vienna to Budapest

A Bride's Cruise on the Danube

When the Bavarian Wittelsbach Princess Elisabeth boarded the Danube ship “Stadt Regensburg” in Straubing on 21 August 1854, it was not to start a pleasure cruise. No, the 16-year-old was on her way to Vienna for the “wedding of the century” – her own – because the previous summer the Austrian Emperor had fallen in love with his little Bavarian cousin in Bad Ischl and immediately got down to business. Much to the displeasure of his mother Sophie and aunt Ludovika, who had actually seen Sisi’s older sister in the role of the future Empress of Austria, after all, “Néné” had been prepared for such a wedding for years.

In contrast to the Sisi, who had actually only been taken along to distract her a little in Ischl and possibly set her up with Franz Joseph’s younger brother, Karl Ludwig. Unfortunately, the mother’s plans quickly got out of hand in Ischl, because Franz Joseph, quite un-emperor-like, simply ignored Néné and fell in love with Sisi at the very first afternoon tea on the Ischl esplanade. By all accounts, the clumsy Sisi was a little embarrassed at first when dancing with the young emperor – especially when, after the famous “Cotillon”, a popular baroque dance, he unceremoniously handed her his bouquet of flowers that had originally been prepared for the bride. It was immediately clear to all present, those from Vienna and those from Bavaria, that history had been made that evening, 17 August 1853, at the dance in Bad Ischl. Elisabeth was actually embarrassed by the whole thing at first. This was not to change for the rest of her life – she always disliked court ceremonies.

She was not given much time to recover from the surprise and prepare for her role as empress. The very next day, on 18 August, they sat next to each other (!) at the Emperor’s birthday party, and on 19 August they were already allowed to speak to each other alone in private: The die was cast when the Empress Mother gave way to the 15-year-old Bavarian girl as she walked into the church. By then, at the latest, everything was clear to everyone, especially the gawking people in Ischl. 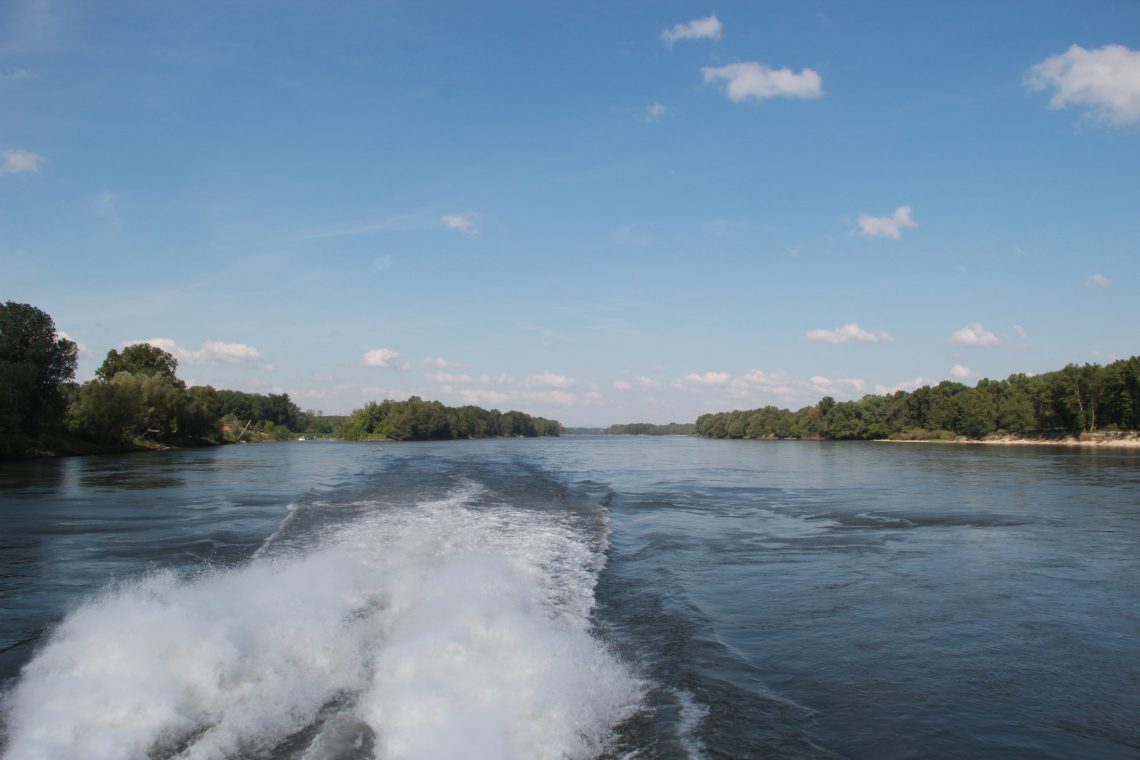 From those memorable days on the Traun in Ischl, however, back to the Danube – the river that was to bring Sisi and Franz Joseph together forever just under a year later. In the truest sense of the word. From Straubing to Passau the journey was still quite quiet, but in Passau there was already a first “reception”, as it was called then as it is now: the Bavarian Estates said “Pfiat di” (or something more official) and an Austrian delegation probably greeted Elisabeth and her entourage with a hearty “Servus” (or something). And in the evening, the huge convoy of ships docked in Linz.

There the entire convoy with Sisi left the “Stadt Regensburg”: the bridegroom had in fact sent a new “express steamship” which would take the Princess and her entourage to the Wachau and on to Nußdorf in Vienna. And he had also travelled to meet her – completely outside protocol, very unusual for Franz Joseph… Under the gaze of a crowd that was frighteningly large for her, Elisabeth had to greet her bridegroom. So embarrassing again! And Elisabeth really was in the worst possible mood on this bridal cruise on the Danube, if one can believe the Sisi biographer Brigitte Hamann (and one can do so without reservation). They had travelled in a six-horse carriage to the departure point on the Danube in Bavaria and the farewell to the old life in Bavaria and the siblings had been tearful. The enormous interest shown everywhere in Sisi on her Danube journey frightened and unsettled her.

The express steamship that the impatient bridegroom had sent was the largest and most luxurious passenger ship the Danube had ever seen at that time – Emperor Franz Joseph did not let himself be short-changed. The cabin for Sisi was lined with purple velvet, the 140 hp a small sensation. Decorated with the lush flower arrangements, the ship resembled a floating garden on the Danube. 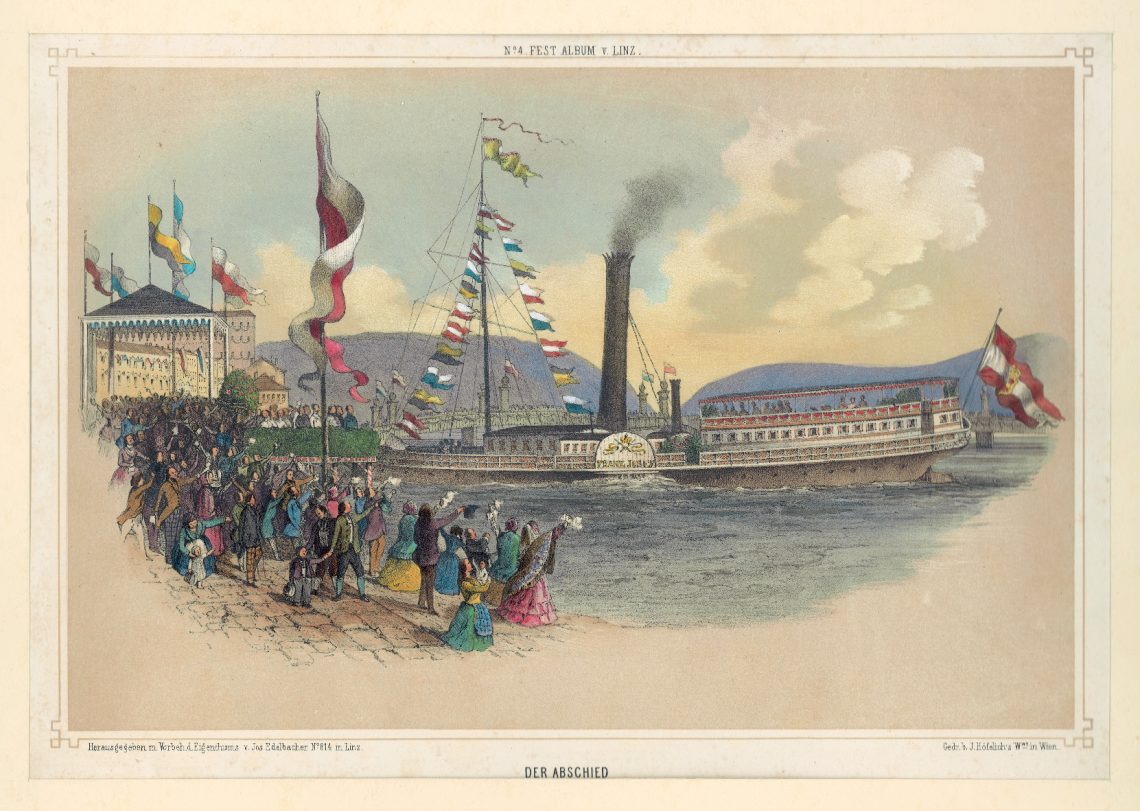 After spending the night in Linz (separately, of course), the Emperor returned to Vienna at 4.30 a.m. on the steamship “Austria” – because in the afternoon in Nußdorf near Vienna, he wants to officially welcome his bride again – again to the cheers of the enthusiastic crowds. She departs at 8 a.m. from Linz and arrives in Nußdorf in the afternoon on the aforementioned steamship “Franz Joseph I”.

The journey from Linz to Nußdorf is like a river parade: in every town people greet and cheer the ship that is taking the bride to Vienna. Elisabeth has to spend the entire journey on the upper deck, showing herself, being gawked at, representing, waving, being friendly. The “Hermine” with an Upper Austrian deputation follows the bridal ship on its heels, so to speak.  The reception in Linz was nothing compared to the one waiting for them in Nußdorf – the Danube port in Vienna. Pompously, with an immense triumphal arch, she had to disembark under the eyes of all the dignitaries, amid the thunder of cannons and the ringing of bells from all the Viennese churches. Afterwards, in a procession of carriages, they drove through the whole of Vienna to Schönbrunn.

And on 24 April 1854 in the evening, she was already Empress of Austria – she had had to travel to the Augustinian Church with her mother in a glass carriage, once again exposed to the gaze of the gawping Viennese. The “beginning of the end”, Elisabeth would perhaps say today…

62 kilometres from Vienna lies the nearest metropolis of the former Danube monarchy: Bratislava. For a long time, Bratislava had been the capital of Hungary. At the beginning of the 20th century there was even a tram line from Vienna to Bratislava, as you can see in the current DONAU exhibition at Schallaburg Castle. From the castle’s crown tower you can look down on the Danube and have a panoramic view of three countries: Slovakia, Hungary and Austria. 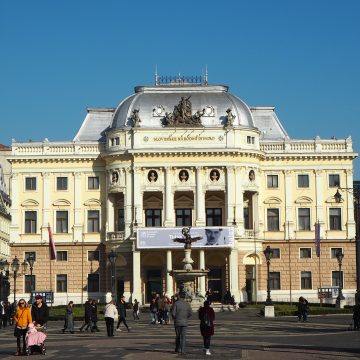 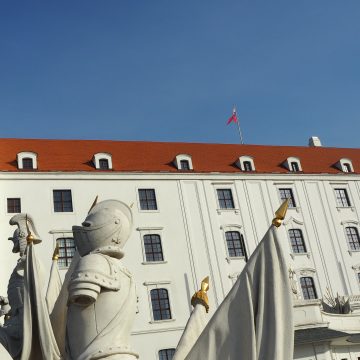 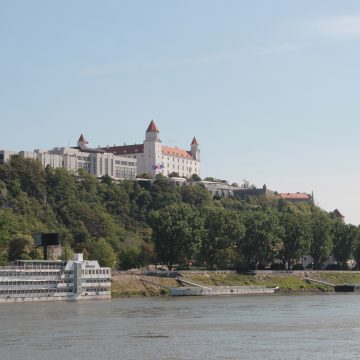 Sisi must have travelled countless times by ship via Bratislava to Budapest – including that memorable journey in May 1857 when, against the express wishes of her mother-in-law, she travelled to Hungary with her two daughters to attend to lengthy representational duties: During their stay there, her first-born daughter Sophie died.

10 years later, however, in the spring of 1867, Budapest on the Danube resembled a “permanent party”, as one would say today: The four-day coronation celebrations of Franz Joseph and Elisabeth are about to take place. Once again, crowds of people flock to Buda not to miss the procession to Matthias Church. There the coronation of Franz Joseph as King of Hungary takes place. Franz Liszt’s Coronation Mass resounds, the master himself is also there, but he is not allowed to conduct. But the secret protagonist in Budapest, indeed in the whole of Hungary, at this time was Elisabeth, whose intercession on behalf of the Hungarians was probably credited with the equalisation. She spoke fluent Hungarian – much to her husband’s displeasure, even with her own entourage and her most intimate confidante, the court lady Ida Ferenczy from Kecskemet – an affront in Vienna. At that time, the Sisi cult around the “Hungarian Empress” probably arose in Hungary, which seems to be unbroken there to this day. The fact that she learned Hungarian of her own free will (while failing in Czech) was more than a thorn in the side of the Viennese court – but Hungary and Budapest meant “freedom” for Sisi until the end of her life. Her closest confidante Ida, however, may have somehow been infiltrated at court: according to biographer Brigitte Hamann, it is certain that she was also a confidante of the Hungarian liberals who were striving for the “Compromise” and that she reported to Budapest what was going on at court in Vienna. Sisi’s friendship with Ida had been meticulously planned for a long time, but as a Hungarian she remained a foreign body at court – all the closer she became to Elisabeth, until her death.

Throughout her life, Elisabeth remained an advocate for the special wishes of the Hungarians: she probably spent more days and nights in Gödöllö Palace near Budapest, which the Magyars adored after her coronation as Hungarian queen, than at home in Schönbrunn Palace. The palace had 136 rooms, 103 of which were living quarters, where she spent much time with her children and riding horses. “Here you have your peace and quiet, no relatives, no one sects you, unlike Vienna where the whole imperial baggage is! Nothing bothers me here at all, I live here like in the village, I can go for walks or take carriage rides on my own,” writes an obviously relieved Elisabeth to her mother in a letter. The Hungarians love her for it and it is also good for the Dual Monarchy, Franz Joseph can thank his wife.

She gave birth to her daughter Marie Valerie ten months after the coronation, also in Budapest – the Hungarians were again delighted. Incidentally, Marie Valerie is said to have complained many times later that she only ever had to speak Hungarian with her mother… 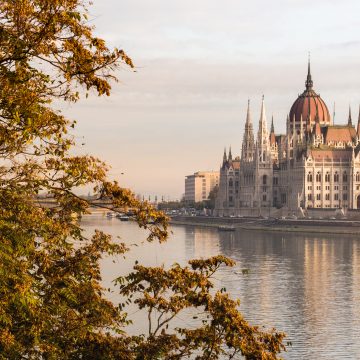 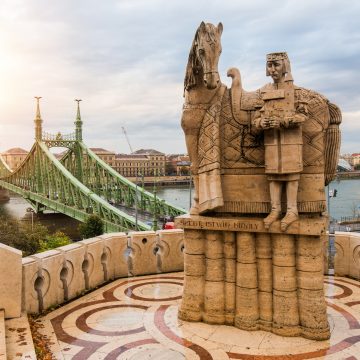 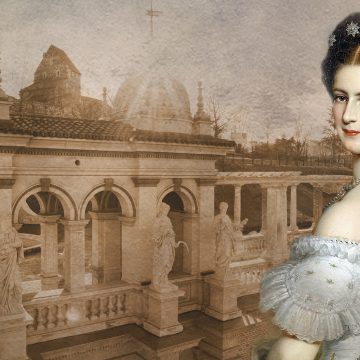 Incidentally, the empress’s favourite place in Budapest is said to have been on the viewing plateau above the city, where a tower named after her stands today. Sisi and Ida are also said to have been treated to sweets at the Gerbaud bakery, and the coffee house is still a fixture on every visit to Budapest. After Sisi’s death, the devoted Ida Ferenczy initiated the very first Sisi Museum in Budapest, which was, however, destroyed during the Second World War. Today, however, the Sisi Museum in Vienna’s Hofburg invites you to visit it. Or you can watch the “Sissi” films with Romy Schneider for romantic reminiscence. You can read more about the myth of the Habsburgs and their traces along the Danube here.

However, the timeless biography by Brigitte Hamann on “Elisabeth. Empress against her will”. “Against her will” – one could already observe that during the bridal journey on the Danube… 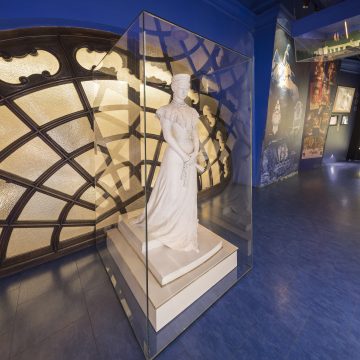 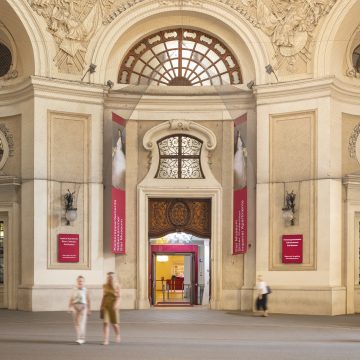 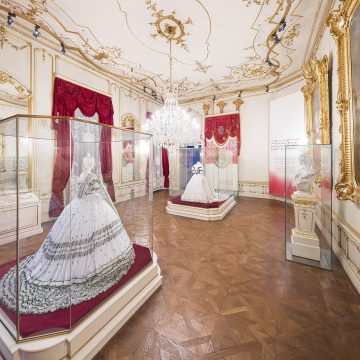 csm_Sisi_Museum_Replica_of_an_Empress_Elisabeth_Dress__c__Schloss_Schoenbrunn_Kultur-_und_Betriebsges.m.b.H._Severin_Wurnig__2
Empress Elisabeth and the Danube metropolises of the K.u.K. Monarchy

All information subject to any Covid19 restrictions on locations!