A culinaric journey along the Danube from Passau to Grein

Of sweet bumpkins, slow food and pleasurable stops by the river

The “Passauer Tölpel“, a landmark that can also be enjoyed as a delicious gingerbread cake, tells his story: “I fell from Passau Cathedral and broke my beautiful body. I’m still alive and kicking, just a little weak in the head.” The stone head from Passau must have once fallen from a cathedral, so it’s no wonder he’s still a bit confused and considered a dolt. But anyone who tastes the sweet delicacy in Passau probably doesn’t care about its soul: pure pleasure is on the agenda in Passau when you bite into the sweet “Tölpel”.

And Passau is only the beginning of our little culinary journey to Upper Austria’s Strudengau region. Because along the Danube you come across culinary delicacies again and again that are quite typical and authentic: For the region, for the landscape, for the people along the Danube. You should not miss this, because: Food and drink keep body and soul together. Also when travelling along the Danube.

Have you ever been to Theklasien, no? This small country is still missing on your personal to-do travel list? Not for long, the next time you are travelling in the upper Danube valley: This is where Theklasien is located, a small oasis of near-natural agriculture with permaculture – invented, named and run by Thekla Raffezeder, an expert in wild herbs, medicinal plants and all kinds of fruits and plants that she processes further. Sheep and goats also live here and all products are processed and sold by hand – keyword “Naturwunda“. The latter is Thekla’s famous herbal tea. 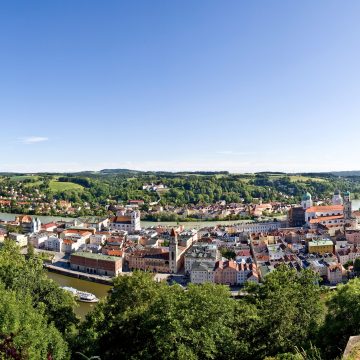 The truffle from the Sauwald, on the other hand, is a very special cheese from Somann Käsespezialitäten in Esternberg, and it is produced on an organic farm with a small herd of goats. This Sauwald forest has a rather harsh climate, but with its mineral-rich soil it is also excellent soil for “Sauwald Erdäpfel”, which are said to have a very special taste. That’s why distilling vodka from these potatoes was by no means a foolish idea. “Sauwald Vodka” is now well known and established – popular also because of its “slanted bottle”. Why is the bottle slanted? The slope where the potatoes grow – the Sauwald – is slanted as well, after all. That makes sense, doesn’t it?

The farmers around Eferding are taking care of 50 varieties of potatoes from the region, some of which are old and have fallen into oblivion, and they are cultivating the “Eferdinger truffle” variety again. Cheese truffles and potato truffles – so many regional specialities – you need time to taste and try them all.

In the Upper Danube Valley in Neustift im Mühlkreis, you will find the Schoko-Laden (chocolate shop), a kind of local supply when there is a great need for sweet delicacies. There, where the Trappists of Stift Engelhartszell live and cause a culinary furore with their fine liqueurs, they have found a congenial culinary partner: The egg liqueur of the monastery brothers was the first filling of pralines: today, you can therefore also buy sweet products from the chocolate shop at Stift Engelhartszell. But with the Trappists, home-brewed beer is not far away either:

Austria’s only Trappist beer has to meet quite strict rules and requirements: It may only be brewed in a Trappist monastery or in the immediate vicinity by the monks themselves or under their supervision. In this case, the result is a strong beer with a high alcohol content. The three varieties are called “Gregorius”, “Nivard” and “Benno” and commemorate three confreres of the Engelszell monks.

And while we are on the subject of liquid enjoyment, the national drink is not far away here in Upper Austria: Austrian Cider, which has long since ceased to be a simple thirst quencher for farmers, but has already made it into the quality league of a top drink: there are even sommeliers here. One of them is Erich Aumüller from the Donautaler Mostkellerei in Obermühl. His “Donauperle” is a pear frizzante that constantly brings home awards. A little tip: “Mostkrautfleckerln” can be tasted by the chef at the Landgasthaus Lehnerwirt in Alkoven.

The so-called shipmasters who used to work here on the Danube – today we would call them Danube captains – often ran their own restaurants: The local catfish of the Danube – also called “Waller” – was often on the daily menu and still is today. In Wesenufer, at the Wirtshaus Schiffmeister, it is slowly cooked and steamed in beef soup. A speciality from the Danube region in Upper Austria.

Of course, a good beef soup also needs fresh root vegetables: The Eferding Basin is the vegetable garden of Upper Austria – the Haiß family´s farm shop in Hartkirchen is dedicated to vegetable cultivation, with over 50 varieties under cultivation. The Haiß family believes that the “common” onion is usually not given the honour it deserves, which is why they have focused on old varieties of onions with regional roots. Ever heard of the “Hartkirchner Landzwiebel“? If not, then stop by one of the restaurants in this region, because you won’t find this super vegetable in the supermarket, but only in the regional processing of the restaurants.

One of the most beautiful hotspots in the Upper Austrian Danube region is probably the picturesque Donauschlinge, where the Romans once established a naval base. Today, hikers, cyclists and excursionists also like to stop here to feast on the freshly caught dishes of the well-known Hotel Donauschlinge. In a place where people have been working for more than 2000 years, the Danube trout probably tastes particularly good.

Its small relative, the “Steckerlfisch”, is particularly delicious in cosy surroundings, such as at the completely unpretentious but culinary highly competent campsite in Au an der Donau, where the char from the Mühlviertel becomes a hearty Steckerlfisch and is worth a stop while cycling or hiking or in between camping. The food court is much more than just a food court, it is a popular culinary meeting place for all occasions. 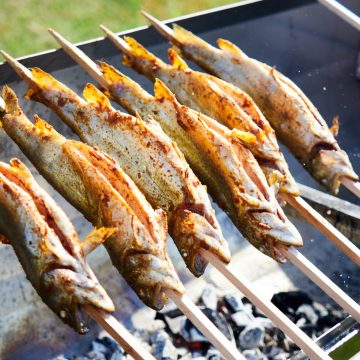 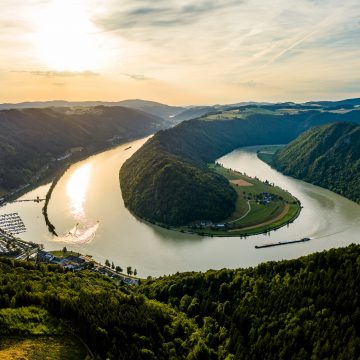 When you arrive in Linz, the capital of Upper Austria, the first thing you should do is treat yourself with a real Linzer Torte – how is it made, the one and only?

It has existed for over 300 years and only with currant jam it is the real thing! You can get a taste of it on almost every corner in Linz, but it tastes especially good at Leo Jindrak’s pastry shop. But let’s go on from Linz to the oldest town in Austria, Enns (or is Vienna the oldest – there’s a lot of debate about that), to taste the “Redhotsecco”. At the Maleninsky farm there are many such unusual compositions and delicacies such as fruit spreads and honey in their own farm shop. The Redhotsecco is served as an aperitif, just like the Marillosecco, Mosecco or Hollersecco. How quaffable that sounds to my ears!

Almost as good as the pleasant-sounding “Rösler” from the Danube Valley, which in turn is a dark red wine cultivated by Weinbau Gmeiner in Perg and was awarded several times, also by Falstaff. It could be enjoyed with a sweet dessert such as “Batzlguglhupf”, the recipe for which the Schörgi family from Grein on the Danube found in the attic: It dates back to 1892 and today the Guglhupf is the highlight of the Schörgi confectionery.

A rather hearty stop is then worthwhile at the Speck-Alm in Bad Kreuzen: As the appealing name suggests, it’s all about spicy bacon from free-range pigs. Which brings us back to the cider, which tastes great with it.

Everything here in the Danube basin is pushing towards cider and wine! What will it taste like in the Wachau!

Regional delicacies between Passau and Grein – a selection