Weddings on the Danube...

An "I DO" with noblesse

Weddings on the route of emperors and kings

The waters of the Danube have already borne many a bride to married life, especially in the days when road and carriage construction still left much to be desired in terms of safety and comfort, and travelling by ship allowed for much more relaxed journeys. This was true when the Duke of Bavaria’s daughter, Gisela, travelled along the Danube from Regensburg to Budapest for her wedding in 995 to the man who would later become King Stephen I of Hungary.

The extent to which the betrothed of the future national saint of Hungary made the decision for herself regarding the means of transport as well as the wedding itself remains a matter of speculation: The bride, whose life of piety drew to a close as abbess of Niederburg Convent in Passau and was later beatified by the papacy, was only ten years old when she married. However, that did not prevent her from becoming the first Christian queen of Hungary and the first great woman on the Danube to go down in history. 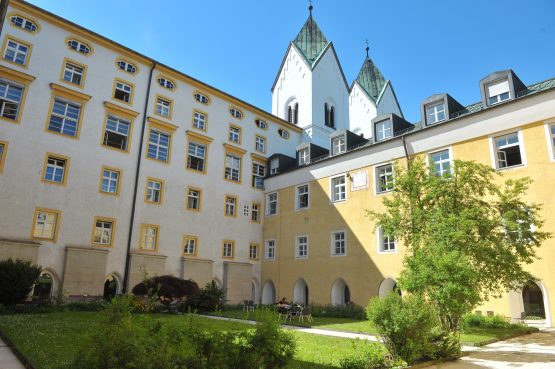 Passau, the centre of Gisela’s later life, had to wait a few hundred years to enjoy the spectacle of a wedding of a crowned head of state. The City of Three Rivers was ultimately rewarded for its patience with an imperial wedding in 1676. The marriage of Emperor Leopold I to Eleonore Magdalene of Palatine of Neuburg went down as a great moment in the city’s history. The wedding of the Hapsburg emperor making his second cousin his third wife is depicted in a large mural by Ferdinand Wagner in the assembly hall of Passau’s city hall. However, a lack of eyewitnesses to the event at the time the mural was painted nearly 200 years later meant that the artist had to rely on a report by prince-bishop court notary Giovanni Bernardino Gentilotti. 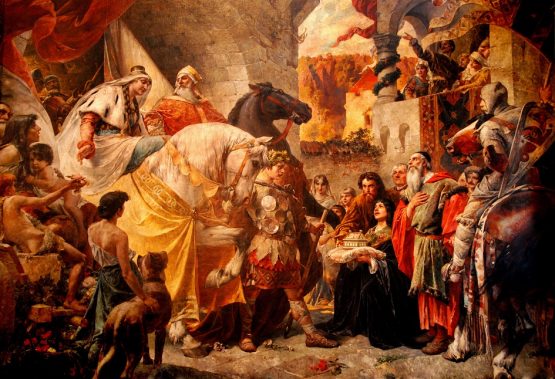 Passau council chambers: Magnificent paintings adorn the walls and ceilings of the baroque-style chambers of Passau City Hall. In addition to the wedding of Emperor Leopold I, painter Ferdinand Wagner also depicted a scene from the Nibelungenlied, which was likely written in Passau.

A guided city tour for individuals can provide you with more information about the history of Passau. You’ll see the cathedral square, the city’s charming alleys, squares and promenades and, if possible, the residence and the chambers of City Hall.

Budapest as a wedding venue

Imperial royal weddings were celebrated in all their glory in Budapest less often than they were in Passau. Matthias Corvinus, King of Hungary, Croatia and Bohemia, made his way to the altar of Matthias Church twice – the first time to wed Bohemian princess Catherine in 1461, and the second time shortly before Christmas Eve in 1476, when the ruler took Beatrice of Aragon as his wife.

As a conqueror of other parts of the Hapsburg Empire, Matthias Corvinus also resided in Vienna for a time, where sovereign marriages became all the more common after the city was reclaimed by the Hapsburg Empire. As the quote “Tu felix austria nube” implies, marriage became an exercise in the strategic politics of power, especially from Maximilian I onwards. The Hapsburgs married into Burgundy (in Ghent) and Spain (in Valladolid) and became part of the Bohemian royal house with a sumptuous double wedding in St. Stephen’s Cathedral in 1515.

One of the bridal couples consisted of two children of only nine years of age – Ludwig and Maria – but 12-year-old Anna was given away to a very mature husband, 56-year-old Emperor Maximilian. However, this marriage only served as a placeholder for his grandson, Ferdinand, who was free to consort with Anna once the question of the Spanish throne had been clarified.

It was then a descendant of Maximilian, Maria Theresa, who rejected this raison d’être upon her marriage. With the active support of her governess, Countess Marie Karoline ‘Mami’ von Fuchs-Mollard, she insisted on marrying Francis Stephen of Lorraine, with whom she had fallen madly in love as a child. When her husband asked his future father-in-law, Charles VI, for the young Hapsburg lady’s hand, he did so in a tailor-made garment worth 300,000 guilders (almost 3.5 million euros in today’s money) – an amount that could have been used to purchase the same number of men’s shoes at the time. The magnificent wedding to ‘beautiful Francis’ took place on 12 February 1736 in the Augustinian Church in Vienna. Though Maria Theresa herself followed her heart in choosing her partner, she forced her numerous children into the very political institution of marriage she herself had fought against. 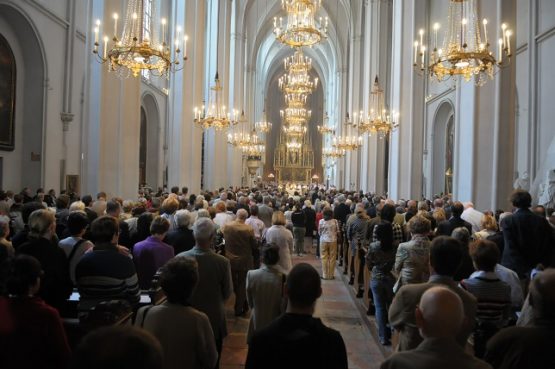 After the death of his beloved Spanish wife, Isabella, Maria Theresa picked Maria Josepha of Bavaria for her equally legendary and youngly widowed son, Joseph II. However, that one of the wedding gifts was a new ‘Italian’ opera by Christoph Willibald Gluck, based on a libretto by the court poet Metastasio, was certainly not an appropriate consolation for forcing her reluctant son into this partnership. Archduke Leopold conducted the opera’s performance from the harpsichord. Some time later, his own wedding would serve as a kind of forerunner to the British romantic comedy “Four Weddings and a Funeral” starring Hugh Grant and Andie MacDowell: Right in the middle of his jolly wedding ceremony, his grandfather, Charles VI, died of a stroke, after which his mother, Maria Theresa, had to ascend the throne.

As with her other children, her daughter Maria Antonia, better known as Marie Antoinette, would not be spared from a fate of arranged marriage. The bridal route proceeded along the Danube led by 57 carriages and 350 horses – upstream, as the bride was headed to Paris.

Matrimonial travel along the Danube

Several decades later, Princess Elisabeth of Wittelsbach took the opposite route. Flanked by an eager public, the 17-year-old embarked upon a journey from Passau to Vienna in April 1854 to marry Maria Theresa’s descendant, Franz Joseph I, once again in the Augustinian Church. That the marriage was ill-fated was already apparently during their honeymoon to Vienna along the Danube. The imperial steam yacht Adler ran aground among the dreaded whirlpools and bottlenecks of Grein. The bride and groom and their crew narrowly escaped, but survived the accident unscathed and continued the honeymoon on the replacement yacht Hermione.

Many centuries before, the marriage of the Duke’s son Albert to legendary beauty Agnes Bernauer in the Danube village of Straubing came to a tragic end. The Wittelsbach nobleman and this commoner daughter of a barber surgeon had probably met each other around 1428 at a tournament in Augsburg. Deeply in love, the couple married in secret, turning their quiet liaison into a state affair. After two years of marriage in the ducal palace in Straubing, her father-in-law, Ernest, had her arrested, condemned her as a “wicked woman” and had her drowned under the bridge over the Danube near Straubing to prevent any possible succession disputes.

The memorial chapel honouring Agnes Bernauer was erected by Duke Ernest I, her father-in-law, the year after her death. It was a visible sign of reconciliation with his son, Albert III. This reconciliation in the house of Wittelsbach had been preceded by months of violent clashes between father and son, during which Albert III even threatened his father with war.

The late Gothic chapel in the historic cemetery of St. Peter houses a wonderful red marble epitaph commemorating Agnes Bernauer. On it, she is depicted dressed in the garb of a 15th-century Munich patrician and carries a long chain of prayer beads in her hands, a common wedding present from a groom to his bride. At her feet lay two puppies as symbols of loyalty. The chapel is accessible through guided tours that can be booked through the Office of Tourism and City Marketing. In addition to guided tours, visitors can peer through the latticework to catch a glimpse of the chapel and Bernauer’s epitaph.

Agnes Bernauer lived with Duke Albert III at the ducal residence in Straubing for around two years and would certainly have been well acquainted with the imposing great hall, and may even have danced in it. The hall dates back to the 1420s. It was one of the largest ballrooms in the German-speaking realm in the late Middle Ages. The great hall can be seen as part of a guided tour. It serves as an event hall, hosting concerts and receptions.

Carmelite Church of the Holy Spirit

The Carmelite Church was also built during the heyday of the Duchy of Bavaria-Straubing-Holland, beginning in 1368. It served as the court church for the house of Wittelsbach in Straubing, which is why Duke Albert II is buried here. His tomb, which dates back to the first third of the 15th century, is one of the most valuable late Gothic funerary monuments in southern Germany.

Agnes Bernauer wanted to be buried here as well. She donated an altar to the Carmelite Church which was linked to a perpetual mass during her lifetime. Two months after her death, her husband, Duke Albert III, renewed and expanded this endowment.

Agnes Bernauer was likely buried in the cloister of the Carmelite monastery according to her wishes. However, her grave has yet to be found – something that is likely due to the fundamental renovations the church underwent during the 17th and 18th centuries. The church is open during the day and is open to visitors.

The Agnes Bernauer Festival Association stages the story of the life, love and death of Agnes Bernauer in the courtyard of the ducal residence. Some 200 amateur actors then invite the audience to travel back in time to the late Middle Ages. The next production will be held in 2019.

Regensburg, located upstream, from where Blessed Gisela departed on her bridal journey, boasts one of the last great noble weddings on the Route of Emperors and Kings. On 3 May 1981, offering free beer to the people of the city, the glamorous spectacle that was the wedding of ‘punk princess’ Mariae Gloria, Countess of Schönburg-Glauchau to Johannes, the 11th Prince of the famous German noble family of Thurn and Taxis took centre stage. The royal carriage that conveyed her to her wedding can be viewed in the Marstall Museum in Regensburg.

Incidentally, the fact that the Bavarian coat of arms over the city carries the unmistakable blue-and-white diamond pattern is due to another high society wedding. It originates from the Bogenberg mountain on the Danube and was added to the Bavarian coat of arms through the marriage of Countess Ludmilla of Bogen to Ludwig, Duke of Bavaria, in 1204 atop the “holy mountain of Lower Bavaria”.

Regensburg, located upstream, from where Blessed Gisela departed on her bridal journey, boasts one of the last great noble weddings on the Route of Emperors and Kings. On 3 May 1981, offering free beer to the people of the city, the glamorous spectacle that was the wedding of ‘punk princess’ Mariae Gloria, Countess of Schönburg-Glauchau to Johannes, the 11th Prince of the famous German noble family of Thurn and Taxis took centre stage. The royal carriage that conveyed her to her wedding can be viewed in the Marstall Museum in Regensburg.

Incidentally, the fact that the Bavarian coat of arms over the city carries the unmistakable blue-and-white diamond pattern is due to another high society wedding. It originates from the Bogenberg mountain on the Danube and was added to the Bavarian coat of arms through the marriage of Countess Ludmilla of Bogen to Ludwig, Duke of Bavaria, in 1204 atop the “holy mountain of Lower Bavaria”.

Weddings on the Danube...
Links to hidden gems for getting married on the Upper Austrian Danube
Culture History
WordPress Cookie Plugin by Real Cookie Banner