On 1 June, the new exhibition at Schallaburg Castle in Lower Austria opened its doors: “DANUBE – People, Treasures & Cultures” is its theme and its itinerary is a little unusual for us visitors. Because the exhibition does not follow the direction of the Danube’s flow, but sends us “against the stream” – just as the unusual kilometre marking of the river does. The Danube starts counting its river kilometres at kilometre zero in Sulina: where the Danube flows into the much-cited Black Sea, that’s where our journey begins westwards along the river to the Renaissance castle of Schallaburg in the foothills of the Melk Alps in the Mostviertel. Why are we travelling so decidedly against the stream in terms of the exhibition?

Curator Domink Heher explains: “The journey against the stream is primarily intended to make clear that a river is not a one-way street: exchange has always taken place in both directions… The exhibition journey from Sulina to the Wachau is intended to inspire visitors to explore the Danube region outside the walls of Schallaburg.”

We are happy to do so, but first we enter Schallaburg’s beautiful new visitor portal – the car park is already well filled on the first day of the exhibition, 1.6.2020 in the morning. After the weeks of curfew thanks to the Corona Virus, we too are hungry for culture and eager to hear the stories behind the Danube, the landscapes and the people in the Danube region. 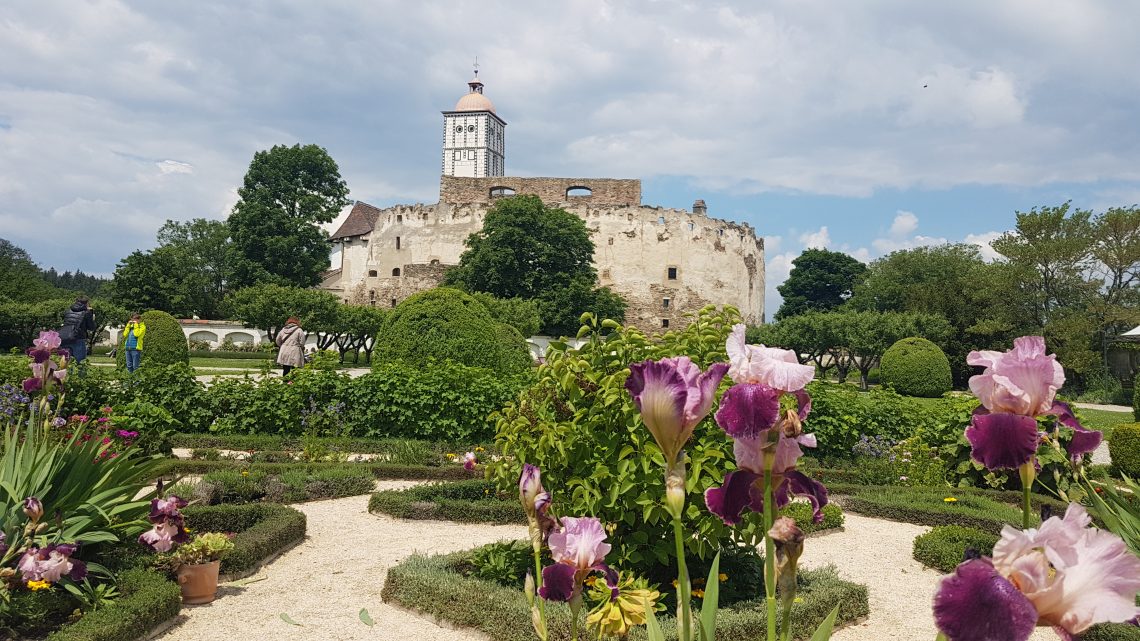 Schallaburg Donau © Angelika Mandler-Saul
"My Journey along the Danube"

This is the title of the exhibition’s yellow travel guide – which Danube countries have I already been to? There are 10 countries, can you name them all at once? Not us, they are: Romania, Ukraine, Moldova, Bulgaria, Serbia, Croatia, Hungary, Slovakia, Austria and Germany. Video screens with stories of people and their professions along the Danube, of tourist regions, of culture and culinary delights and sometimes also stories about vanished islands, past cultures and displaced peoples accompany us throughout the exhibition.

The children, on the other hand, are picked up in a completely different way: also multimedia-based, but also haptic: small caves to crawl into and explore, they listen to the pine marten, the white-tailed eagle and the swans chatting about their habitat and their everyday animal life: so funny and appropriate for children and with such amusing texts that I sometimes prefer to listen to the children’s version of the background stories instead of staying in front of the video screens. The texts are written by the well-known and award-winning children’s author Lena Raubaum, who is also responsible for the animal voices – you can also listen to them online. Dino is the scattered Danube crested newt, Serban the sea eagle and the swans are called Pavol and Paul – they have known their Danube for centuries much better than we humans and reveal their little secrets to the children. Or did they know that a “Nase” is a fish? Exactly, Nele Nase just has the edge. 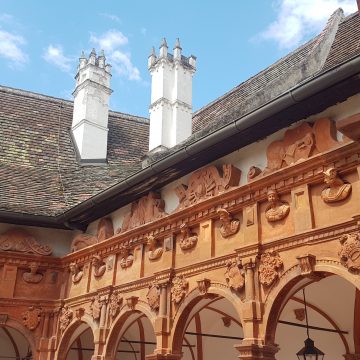 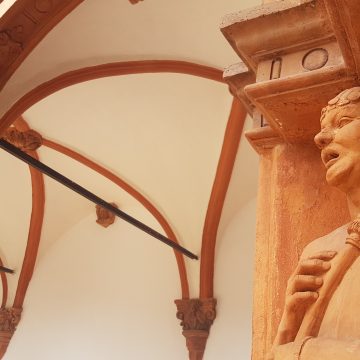 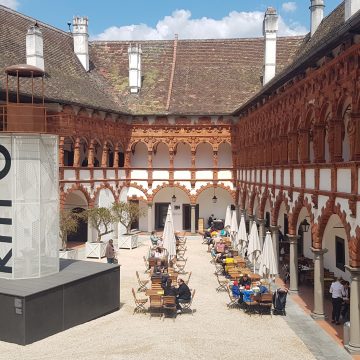 Schallaburg Donau Angelika Mandler Saul (10)
Did you know that....

But then there is surprising information and exhibits that have never been seen in Austria before and that demand my full attention. For example, that 20 million years ago the Danube was still flowing westwards – now it flows eastwards. It has no source of its own and between 1012 and 2013 it experienced 450 real major floods. From 1768, Nikolaus Ernst Kleemann travelled 2000 kilometres on the Danube from Vienna to the Black Sea and wrote down his experiences in a diary, which was published in 1783 with the somewhat unwieldy title “Diary of Journeys from Vienna on the Danube to the Black Sea, then on land through the Butschiak and Nogemtartarey to the Crimea, from there across the Black Sea to Constantinople and Smyrna and through the Archipelagum, the Gulf of Venice via Trieste back to Vienna. In the years 1768, 1769 and 1770, together with an appendix on the special curiosities of the Crimean tartarey and tested drafts of the plot to the Levant” was published as a printed work and is now only available in selected second-hand bookshops.

Did you know that the Danube delta with its pelicans near Sulina is somewhat larger than the Mostviertel and that there was a “little Vienna” in Romania with the town of “Bulg” – there, for the first time in the history of photography, a person was depicted in a photograph and the exhibits on display are indeed reminiscent of villa life at the Semmering at the turn of the century or of intérieurs of the palaces on the Vienna Ringstrasse.

Or have you heard of the Ottoman Danube Island, the Turkish enclave and the once romantic destination Ada Kaleh in Romania (previously annexed by the Habsburg monarchy) – where 25,000 people were resettled to give way to a power plant and which finally sank into the Danube in 1971?

And – do you know the Trajan Bridge over the Danube at Drobeta Turnu Severin in Romania, which was completed by Emperor Trajan as early as 105 AD and was the first permanent bridge over the lower Danube? It is still considered a structural masterpiece today – at that time it was the longest bridge in the world at over 1 kilometre. And that the Danube was already partly overfished in the 19th century is a sad certainty. But the famous fish soup, the Halaszle – you know it for sure, don’t you? Baja in southern Hungary is its secret capital and its production has been documented since 1800: Namely, at that time they used the “pepper from India” – the paprika, as a herbal book from 1609 from the Melk Abbey Library knows. But you have to find out for yourself where the cradle of Europe lies!

Nagymaros on the Danube bend (the “Hainburg of Hungary”) – you are no doubt familiar with it, at least if you heard the news in the 1970s, keyword Gabcikovo. There you will also find the famous and touristically popular “Danube Bend” near the seat of the kings of Visegrád, not for nothing a very charming holiday destination on the border between Slovakia and Hungary. There, near the former royal palace, is also the “Montmartre on the Danube” Szentendre, together with Esztergom, excursion destinations ex Vienna that still have a little touch of a real insider tip. But they didn’t get it from me, I was already there decades ago! 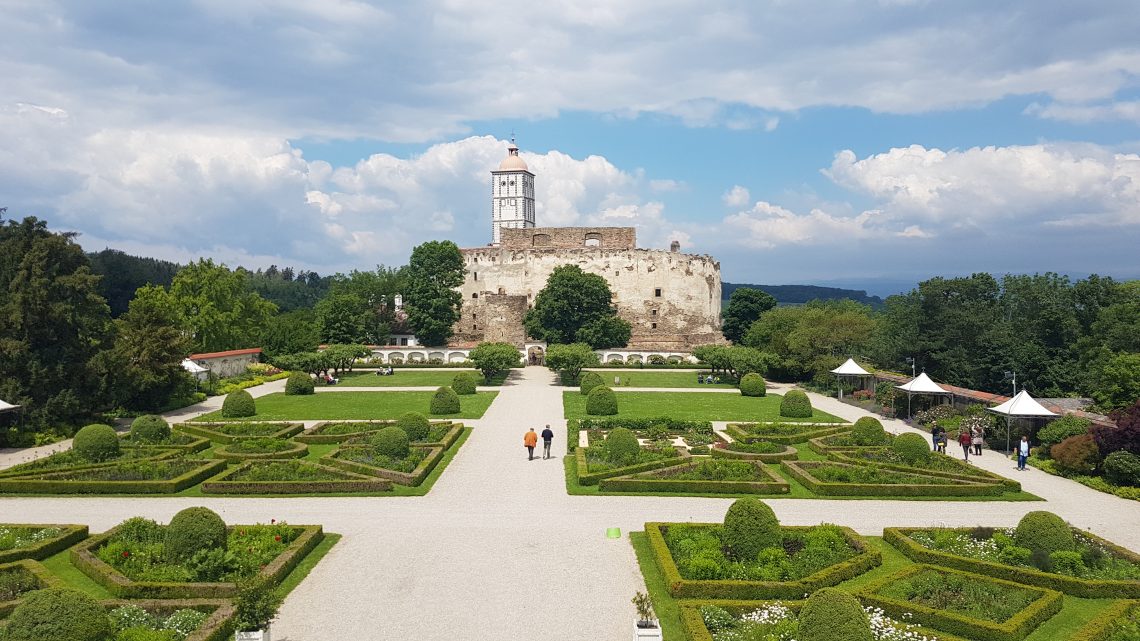 In Bratislava we almost reached Austria and thus the Schallaburg at the end of our journey. Austria for the reason that Bratislava was the capital of Hungary for a long time and thus an important site of our dual monarchy. So important, in fact, that from 1914 onwards a locomotive travelled at 60 km/h between Vienna and Bratislava – a daring mix of Bim and tram. The exhibition also tells us about the ice storms that once threatened Vienna, which were dealt with by “floating gates” and “barrage ships” along the Danube Canal. This brings us finally to the “beautiful blue Danube”, as we Eastern Austrians know it from the Johann Strauss son waltz of the same name. Via the Wachau, one of the last free-flowing stretches of the Danube to which a beautiful part of the exhibition is dedicated, we reach the treasure of the Nibelungs and finally the Melk Alpine foothills at Schallaburg Castle.

Incidentally, the title “On the beautiful blue Danube”, as we know it today from the Danube Waltz, is probably taken from a poem by Isidor Beck from Baja – but he probably used it to describe the Danube in southern Hungary. But that doesn’t bother us, because firstly, it was never blue anywhere and secondly, we know now at the latest:

There is no such thing as the ONE Danube.

Facts about the exhibition at Schallaburg