On July 30, 2021 the time had come: The Roman Limes along the Danube in Bavaria, Austria and Slovakia received the long-awaited and longed-for seal of a UNESCO World Heritage Site.

At UNESCO, this officially means: “Transnational site Danube Limes inscribed on the UNESCO World Heritage List”. In addition to Hadrian’s and Antoninus’ ramparts in England and the Upper Germanic-Rhaetian and Lower Germanic Limes in Germany, which are already inscribed on the coveted list, the Danube Limes is another part of the UNESCO project “Frontiers of the Roman Empire”. The Limes, as the former frontier of the Roman Empire, stretched from northern England across Europe and the Middle East to North Africa. The large UNESCO project wants to see all 6000 km united and protected one day as a single transnational inscription and as a world heritage site.

The longest part of the Western Danube Limes would actually have been contributed by Hungary with 400 kilometers of Limes, but it surprisingly dropped out of the UNESCO application. So the application had to be re-evaluated at UNESCO, which took time. So far, the following sections of the former limes from the heyday of Rome are now UNESCO protected:

Hadrian’s Wall in the north of England is the best developed part of the entire Limes and has been a World Heritage Site since 1987. The Antoninus Wall, a fortification of wood and earth ibidem was awarded in 2008. More information at https://www.english-heritage.org.uk/visit/places/hadrians-wall/

The Upper Germanic Rhaetian Limes (550 km) was more of an economic border and has been a World Heritage Site since 2005, running between the Rhine and the Danube.  The Lower Germanic Limes is 400 km long and runs exclusively as a river border along the Rhine. It was designated as a UNESCO World Heritage Site on July 27, 2021. More information at limesstrasse.de

The Pannonian Limes (“Danube Limes”) in our latitudes was extensively extended under Emperor Marcus Aurelius and its western section finally became a World Heritage Site on July 30, 2021. 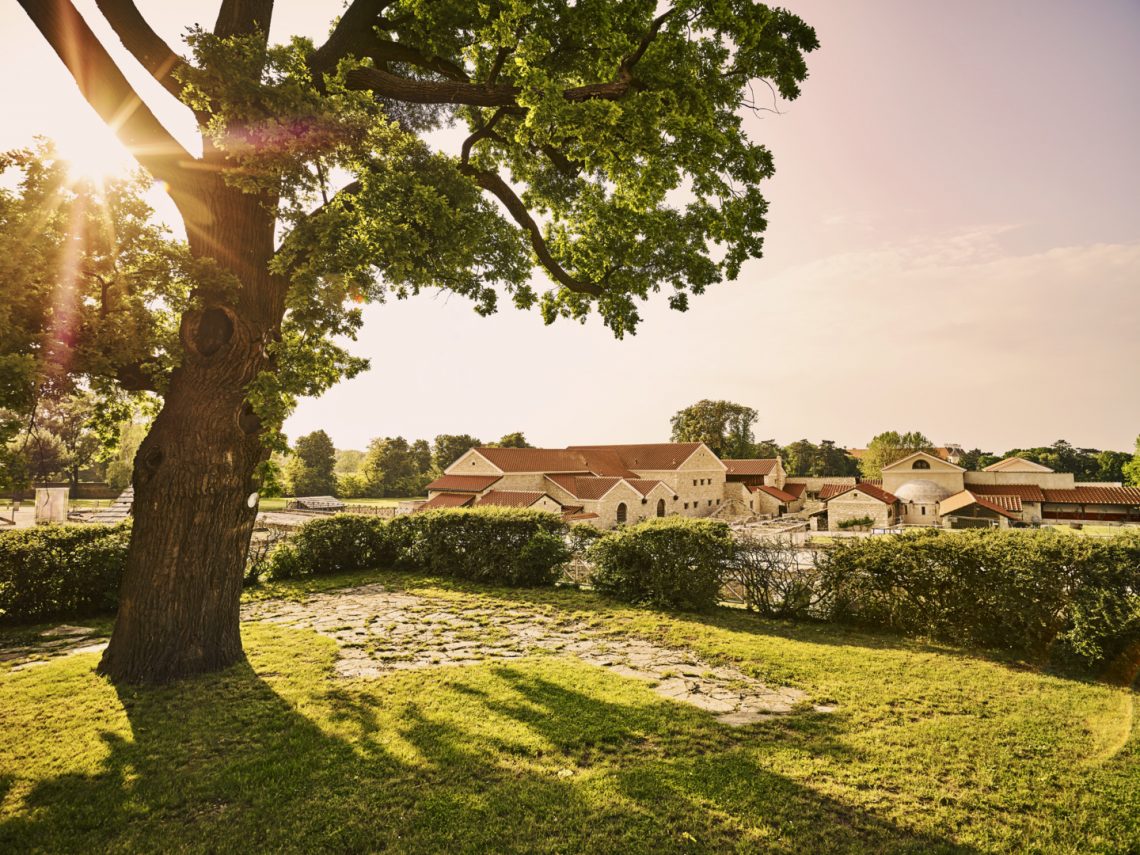 Where and what was the Roman Limes?

According to the latest findings of researchers, the Limes (“border wall”) of the Roman Empire was not initially created as a bulwark or military facility against enemies, i.e. the much-cited “barbarians” beyond these borders. It was also not insurmountable at first, but a place of exchange, communication and trade with the world beyond the Roman Empire. After all, exotic and coveted goods such as olives, oysters, wine and tableware came through the Danube trade routes.

How then can one imagine the “original” Limes? Caesar laid out forest aisles as the outer borders of the empire, followed by ditches and earthen ramparts. Along the Danube and the Rhine, the limes almost always ran along the river courses, and only then were military roads, walls, forts and watchtowers built. The first of these posts were made of wood, later they were built of stone. And it is precisely these that can still be admired, visited or in some places even just glimpsed along the former Limes. 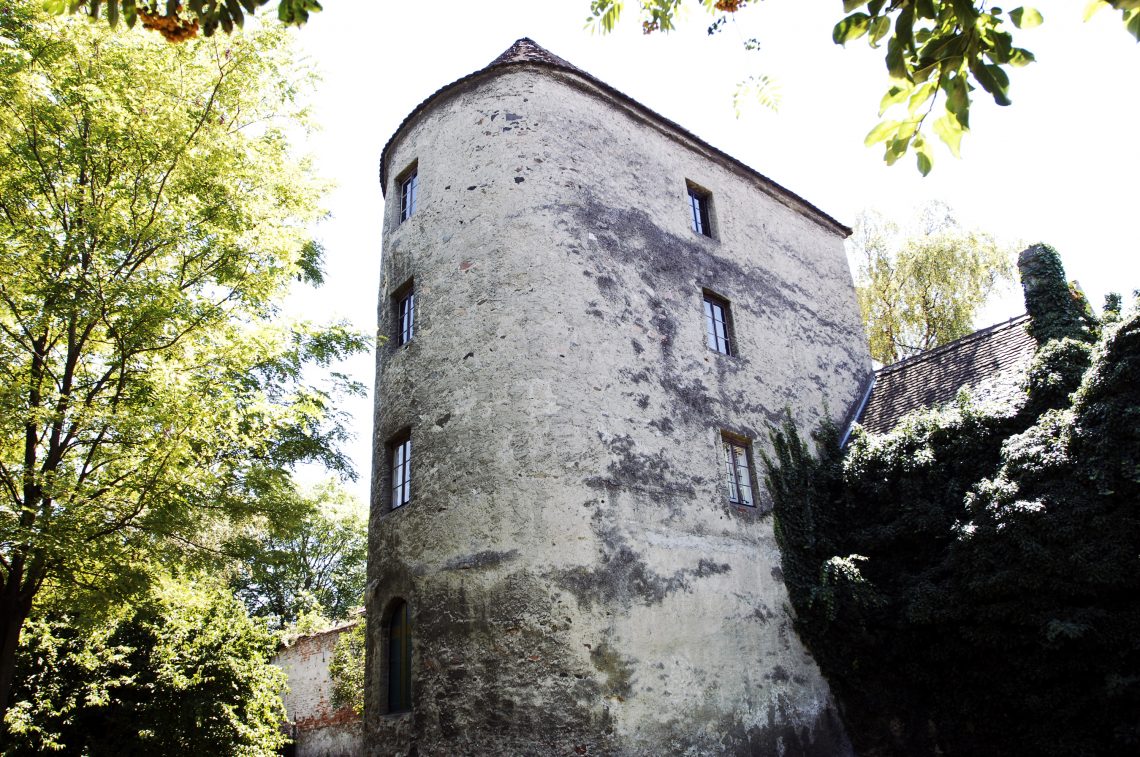 Such famous and well-preserved remains as the Heidentor in the Roman city of Carnuntum in Lower Austria or the fortifications of Traismauer or Tulln and Vienna can be visited above ground at any time. However, at least as many remains of the Limes lie underground and are considered so-called “ground monuments” of the World Heritage Site. Even if they are not immediately recognizable to us as tourists, observers and laymen, these are still important archaeological sites that can provide researchers with information about ancient life along the Danube. Thus, they are at least as worthy of protection and value as what we can see at a glance and is also UNESCO World Heritage.

Sightseeing at the Danube Limes: Traces of the Roman Empire

The Danube formed an initially quite natural outer border of the empire from Bavaria via Austria, Slovakia and Hungary via Serbia, Romania and Bulgaria to the city of Sulina. Only in the later years this river border was additionally fortified also militarily. The UNESCO dignity awarded in 2021 covers the western section of the Roman Danube Limes, because this continues to the Black Sea: the eastern section will be nominated separately – by Croatia, Serbia, Romania and Bulgaria.

The Danube Limes in Bavaria

The Bavarian section of the Danube Limes stretches over nine towns from Bad Gögging via Regensburg to Passau. Directly in the Passau city area, approximately at the mouth of the Danube, Inn and Ilz rivers, there are various remains of Roman installations to the Danube Limes. The city of Regensburg was founded as “Castra Regina” as a legion camp, the former legion camp wall, for example, is a very well preserved Roman city wall, just as the Porta Praetoria is worth a visit. 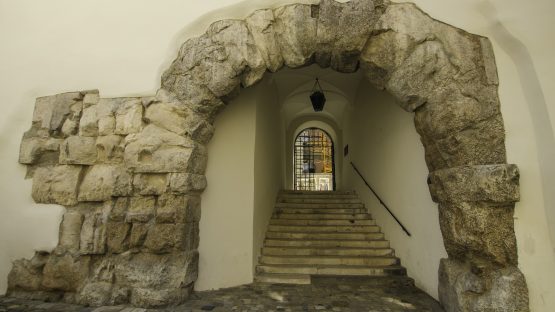 In addition, five museums in Bavaria have joined forces to form the “Roman Museums on the Bavarian Danube Limes”. The Romans called the river border “RIPA” at that time, only today we speak of that very Danube limes. What is hard to imagine in Bavaria today, by the way, is the fact that until the late Middle Ages, wine was actually drunk here in the area along the Danube Limes – by no means beer. For the Romans first brought the first vines here to their camps on the Danube. Barley and beer, that was rather something “for the barbarians” beyond the Roman Empire, beyond the Limes, so the basic tenor of the Romans. 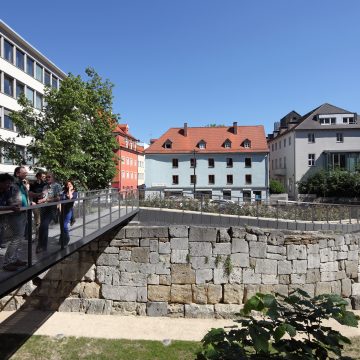 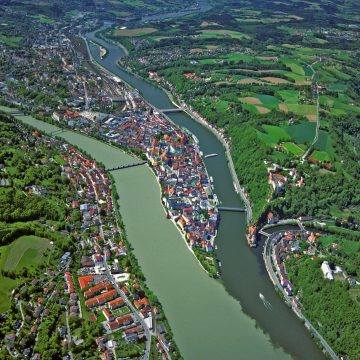 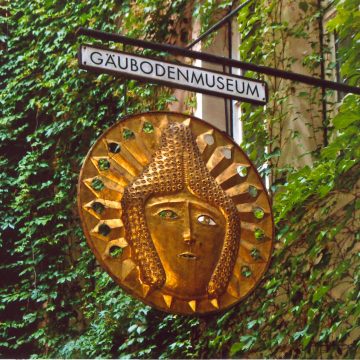 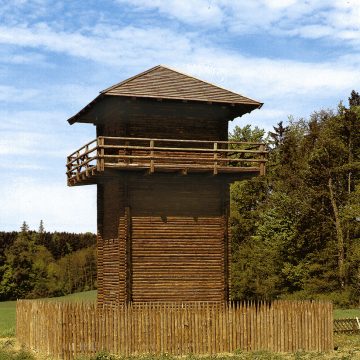 The five Roman museums in Bavaria at a glance:

The Danube Limes in Austria

The Austrian part of the Danube Limes is just under 360 kilometers long and is located in the provinces of Vienna, Lower Austria and Upper Austria. Just like the Limes along the Rhine, the Danube Limes is also called a “wet border”. It secured 4 legionary camps (around Vienna and Enns), 14 auxiliary camps and 20 watchtowers (known to us).

Austria has 22 archaeological sites in this World Heritage Site, 15 museums dealing, among other things, with the Roman period and thus the Danube Limes, as well as 40 (for us) visible monuments. These are the most diverse sites, which prove the course of the ancient border fortifications with forts, watchtowers and the associated civilian settlements and traffic routes to this day.

In Tulln as the former “Comagena”, Traismauer (“Augustianis”) and also Wels (“Ovilava”), for example, the new UNESCO World Heritage status is expected to result in a significant increase in visitor numbers to the respective Roman monuments.  But also previously unknown remains of Roman fortifications – such as in Zwentendorf (“Asturis”), Zeiselmauer (“Cannabiaca”), Klosterneuburg (“Arrianis”) or Schwechat (“Ala Nova”) – are now part of an important UNESCO World Heritage Site. Impressive remains of the Danube Limes can be seen in the following museums and sites, among others: 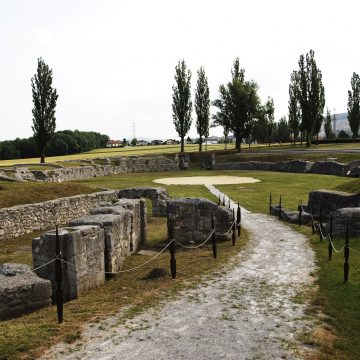 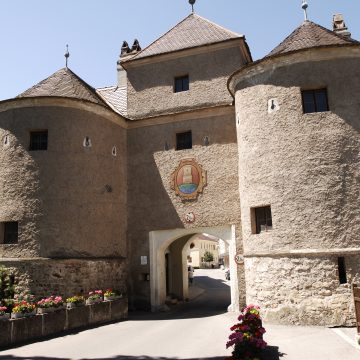 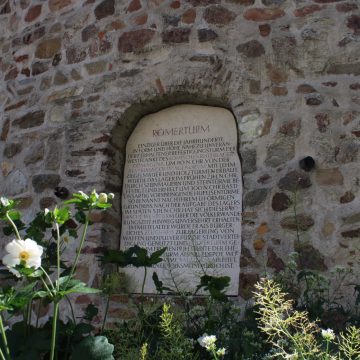 The Danube University Krems is also planning a very special reappraisal of the history of the Danube Limes in Austria: Under the project title “Living Danube Limes”, an authentically reconstructed Roman river ship – for the first time since the 4th century – is to sail the Danube again in 2022 and call at the cities along the river. Together with many Danube partners, the Danube Limes is to be reworked for tourism – it will be built with historical aids and the future “crew” will work and look like the crew of a real Roman river ship. Keyword: Living History. More information about this exciting EU project can be found here.

The Danube Limes in Slovakia

All those who cycle along the Danube – i.e. to a large extent along the former Danube limes – also come across the former outer border of the Roman Empire again and again. This is because 20 “Roman resting places” along the Upper Austrian section of the cycle path invite athletes to breathe a little historical air during their rest. The exposed concrete pillars, which are meant to be reminiscent of Roman milestones, mark the rest areas, each of which includes a rest bench and a stylized Roman head on the stele designed by artist Miguel Horn, and also provides information about the location. Roman numbers on each pillar are a given.

The westernmost Roman rest area is near Passau in Esternberg, Upper Austria, while the easternmost is in beautiful Grein.

All Roman rest areas along the Danube Cycle Path can be found here. 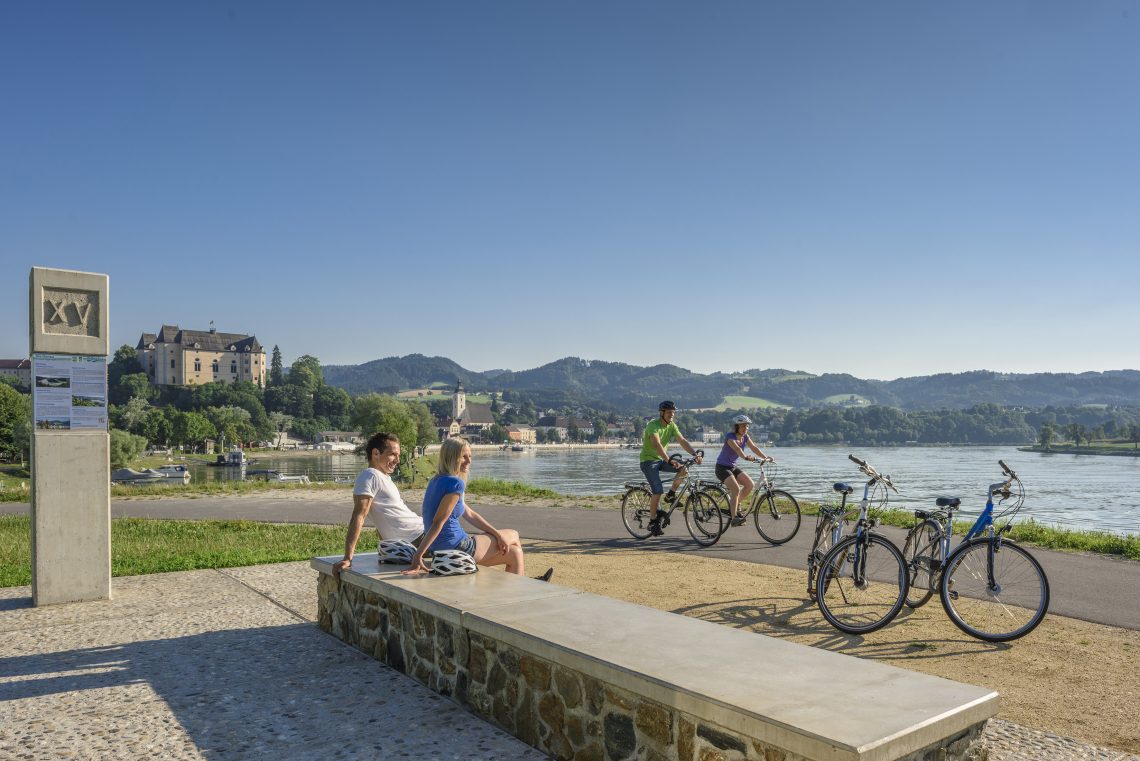 ⮩ The Limes APP: The app of the Bavarian State Office for the Preservation of Monuments for exploring the Limes live in the field or from the couch (app stores).

⮩ Virtulleum in Tulln (Lower Austria): The app for an urban expedition through the eyes of the ancient Romans

⮩ The Carnuntum app: explore all that lies beneath the earth (app stores)

⮩ Multimedia installations on the Roman world in the Wallsee Roman Museum 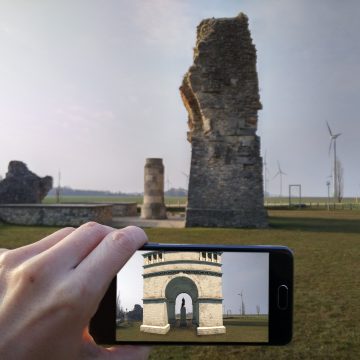 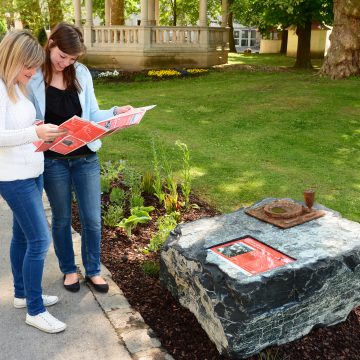 ➔ News from the Ancient Romans at the Danube Limes… 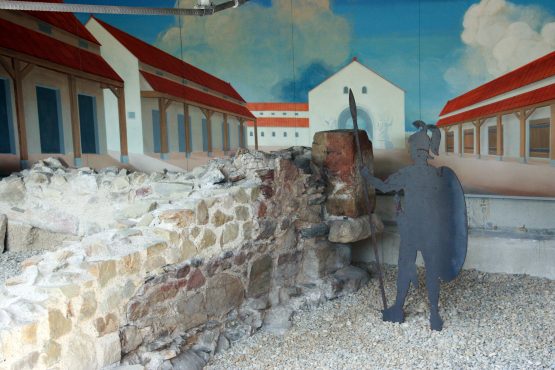