The Pilgrimage Church of the Assumption of the Virgin Mary on 432-metre-high Bogenberg Hill near the Lower Bavarian city of Bogen is an important destination for Catholic pilgrims in the Diocese of Regensburg. It is the oldest pilgrimage church of the virgin Mary in Bavaria. The Bogenberg, which rises 118 metres above the Danube, is also referred to as Bavaria’s Holy Hill. Every year on Pentecost Sunday, pilgrims carry a 13-metre tall candle weighing around a hundredweight, or 50 kg, to the top of Bogenberg Hill as part of a two-day march covering a distance of around 75 kilometres. The candle consists of a wooden pole wrapped in red wax The candle is first transported in the horizontal position. It is then placed upright at the foot of the hill and carried to the top in the standing position. One pilgrim must hold the candle at all times, with a new pilgrim taking over every few steps. According to popular belief, misfortune, war and hardship will occur if it falls. It is said that the candle was dropped and broke in 1913 and 1938, the years before the First and Second World Wars respectively. The pilgrims then gather in a circle around the church at the top of Bogenberg Hill. Each of the votive candles remains in the church for two years. 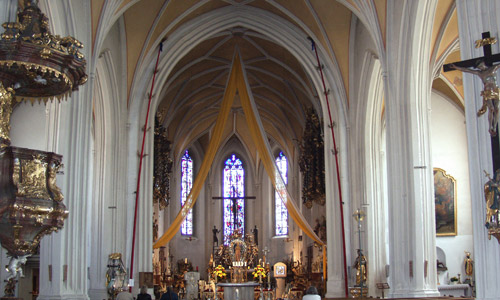