Necessary
These cookies are necessary to run the core functionalities of this website, e.g. security related functions.
Statistics
In order to continuously improve our website, we anonymously track data for statistical and analytical purposes. With these cookies we can , for example, track the number of visits or the impact of specific pages of our web presence and therefore optimize our content.
Marketing
Marketing cookies come from external advertising companies and are used to collect information about the websites visited by the user.
Vilshofen Donau in Flammen © Stadt Vilshofen

The 1,200-year history of the city of Vilshofen can still be seen in many places. Following the large city fire in 1794, renowned master builder Franz Anton Glonner of Burghausen rebuilt the Old Town in the so-called Inn-Salzach style. A distinctive feature of the style is the false gables – horizontally flush façades which conceal the roof timbers. The historic City Tower, which once served as a fire lookout, is a prominent landmark and today houses the city gallery. Built in 1909, Schweiklberg Benedictine Abbey towers above Vilshofen like a mediaeval fortress church. It is certainly one of the most striking works created by Michael Kurz, a young architect from the Bavarian Forest. Kurz brought one of his most unconventional designs to life in the abbey church, a structure inspired by the Art Nouveau while incorporating aspects of the new-Baroque. The library with its well over 40,000 volumes is a treasure trove for the humanities. The abbey seeks to have a beneficial effect through its mission work in Africa, South America and Korea in particular. An Africa museum on the premises is a testament to its work on that continent. 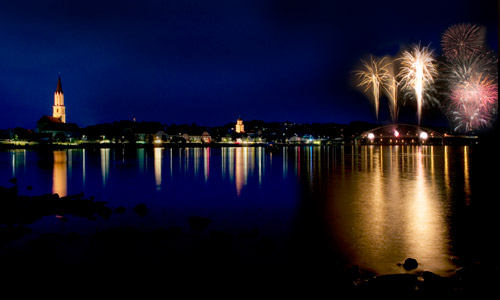