The jewel of Bojnice, a small town near Prievidza, is the “fairytale castle” Bojnický zámok, one of the most visited and beautiful castles, not only in Slovakia, but also in Central Europe. The castle was aligned on a travertine levy, standing on a medieval castle. In the past it was owned by the most famous aristocratic families, the last being the Pálfis. Today we visit the castle collections of the Kunsthistorisches Museum. The first furnishings and works of art from the turn of the 19th and 20th century are published. Unique and most valuable is a late Gothic collection of paintings – the so-called Altar of Bojnice by the Florentine master N. di Cione place from the mid-14th century. Part of the visit to the castle is also a visit to the stalactite cave below the castle, to which 26 different castle fountains are connected. At the end of the month of April and beginning of May instead. During this time, Bojnice Castle becomes a meeting place for ghosts, witches and vampires from around the world. Before the entrance to the castle is the well-known sixteenth old linden tree of Bojnice of King Matthias, whose trunk circumference is about 12.5 m. The King himself likes to visit Bojnice under the Linde festivals and consultations. 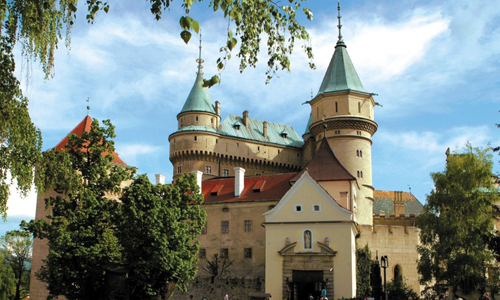