The Primate’s Palace, the city’s largest and most magnificent stately residence, was built by order of Cardinal József Batthyány. Dating to the 18th century, the palace in the Classicist style was the site of the signing of the Peace of Pressburg, which was concluded following the Battle of the Three Emperors near Austerlitz, won by Napoleon I. This battle took place during the golden years of the then-capital of Hungary shortly before the city lost this status. The palace occasionally provided accommodation for Hungary’s kings following their coronation. It has served as the city hall since 1903 and is home to a unique collection of six English tapestries from the 17th century. The staterooms on the first floor are open to the public and are the building’s biggest tourist attraction: the incredibly beautiful Hall of Mirrors, which hosts concerts as well as weddings, is also located here. The palace can be visited daily except Mondays between 10 a.m. and 5 p.m. 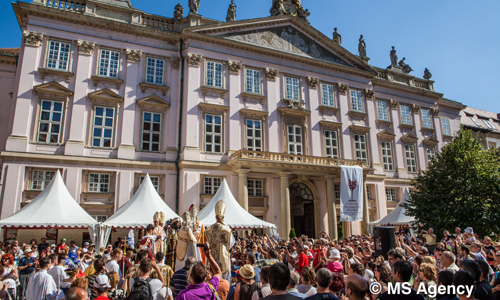