Dating to the 15th century, the Gothic construction with its three naves was the coronation church of the Hungarian kings. Bratislava’s cathedral was built on the location of a former Romanesque church from the year 1221, which was consecrated to the Holy Redeemer. Its construction started at the beginning of the 14th century. This is the place where Ludwig van Beethoven first performed his work Missa solemnis in ‘Preßburg’ in 1835.  A few years later, in 1884, Franz Liszt also conducted a Hungarian coronation mass here. The top of the cathedral’s 85-metre tower is decorated with a gold-plated replica of the crown of St. Stephen – the Holy Crown of Hungary. The copy weighs 150 kilograms and measures more than 1.5 metres. It is an emblem of this coronation church. Only the largest and oldest of the church’s original six bells was preserved. Its name is Wederin, and it was cast in 1674 by Balthasar Herold. With a weight of 2.5 metric tonnes, this bell is among the most valuable in Europe. 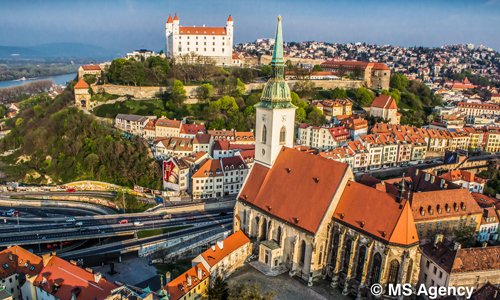