Necessary
These cookies are necessary to run the core functionalities of this website, e.g. security related functions.
Statistics
In order to continuously improve our website, we anonymously track data for statistical and analytical purposes. With these cookies we can , for example, track the number of visits or the impact of specific pages of our web presence and therefore optimize our content.
Marketing
Marketing cookies come from external advertising companies and are used to collect information about the websites visited by the user.
Esztergom Bazilika © Ungarisches Tourismusamt

Esztergom Basilica is Hungary’s largest church, and also its most important by rank, as it is the cathedral of the country’s primate. Stephen I of Hungary founded the first church on the site of today’s basilica in the first decade of Hungary’s statehood. The castle hill at Esztergom has always played an important role in Hungarian history since the country’s founding. Not even the storms and blows of history could detract from its special importance and significance. Its picturesque location above the Danube Bend, its natural beauty characterised by the surrounding hills and the edifices constructed here, which elevated Esztergóm to the position of a secular and sacred focal point by turns, contributed in equal measure to its ability to retain this role throughout the centuries. Simultaneously easily accessible and isolated, easy to defend, uplifting, but also attractive and relaxing due to its natural surroundings: it’s no surprise that this location first became the seat of Hungary’s kings and then the most important centre of the Catholic Church in Hungary. 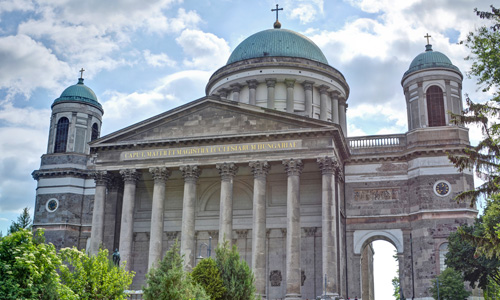