Necessary
These cookies are necessary to run the core functionalities of this website, e.g. security related functions.
Statistics
In order to continuously improve our website, we anonymously track data for statistical and analytical purposes. With these cookies we can , for example, track the number of visits or the impact of specific pages of our web presence and therefore optimize our content.
Marketing
Marketing cookies come from external advertising companies and are used to collect information about the websites visited by the user.
Pannonhalma © Ungarisches Tourismusamt

Pannonhalma Archabbey lies just approximately 20 km to the south of the city of Györ. The oldest (Benedictine) abbey in Hungary with an over 1,000-year history is situated in a striking location on the Mount of St. Martin and is visible from afar. The hill is known as the Mount of Saint Martin because St. Martin of Tours, the abbey’s patron saint, is said to have been born here in the early 4th century. Prince Géza founded the abbey in 996 as the first Benedictine abbey in Hungary and the Hungarian centre of the Benedictine order. However, it’s the library and the Classicist hall that are the highlight on tours of the abbey; over 360,000 and manuscripts are found here. In addition to the historic cloister, the precious library and splendid basilica, a beautiful herb garden and the superbly equipped wine cellar also welcome visitors. The courtyard in front of the church offers stunning views of the surrounding countryside. Pannonhalma Archabbey continues to be inhabited and cultivated by the Benedictine order to this day. The abbey has been included on the list of UNESCO World Heritage sites since 1996. 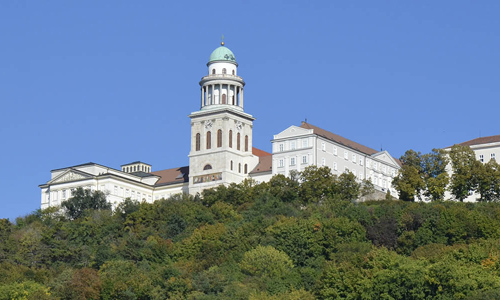