St. Peter’s Cathedral in Regensburg is one of the most important Gothic structures in Bavaria. The Cathedral and its towers, which are visible for miles around, are the centrepiece of the UNESCO World Heritage city of Regensburg. One spectacular features is the colourful glass windows dating to the 13th/14th centuries. The cloister, once the burial site of Regensburg’s citizens and canons, is predominantly characterised by the Gothic ribbed vault from the 15th century. All Saint’s Chapel, erected in the middle of the 12th century by builders from northern Italy, is reminiscent of the city of Ravenna, and can also be visited on a tour. Regensburg’s cathedral is the only Gothic cathedral in Bavaria. 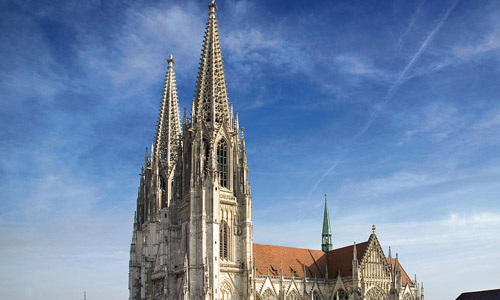