The permanent camp of the 3rd Italian legion in Regensburg (Castra Regina) was completed in the year 179 A.D. under Emperor Marcus Aurelius. Erected on a rectangular area measuring 540 x 450 m, the fortress was surrounded by a mighty wall made of ashlar blocks with towers and a wide ditch in front of it. Imposing gateways on all four sides led to the interior. The legion camp housed up to 6,000 soldiers and was surrounded by an expansive canabae legionis, or civilian settlement outside the fortress walls. In the 3rd century, this settlement extended even beyond the area covered by the later mediaeval city in some places. Beyond the canabae legionis and its business and residential buildings, shops, villas, sanctuaries and a large bathing facility (thermae), burial grounds were located in the south and along a road to the East.

The traces of the settlement from Roman times lie underground, but remnants of the legion camp’s defences are still plainly visible. One example is Porta Praetoria, the north gate of the fort, which is the largest remaining construction from Roman times in Bavaria. But longer sections of remnants of the Roman ashlar wall can be found on the east side of the legion camp in particular. The impressive sections of the wall located here in the Dachauplatz multi-storey car park as well as at the north-eastern and south-eastern corners of the former Roman fort make up the freely accessible ‘document legion camp wall’ attraction. During the car park’s construction, a long section of the Roman wall in the lower level was exposed and preserved. It has been showcased in a striking presentation since 2013 with multimedia information as the centrepiece for this ‘document’.

The large ashlar wall of the legion camp also shielded the early mediaeval city following the withdrawal of the Romans in the 5th century. The eastern side of the Roman wall even served as the city wall during the High Middle Ages and was mended accordingly, which meant that large sections of the old ashlar wall were preserved here. However, its uneven construction also points to the fact that the camp’s wall underwent modifications back in Roman times as well.

The wall can be viewed free of charge. 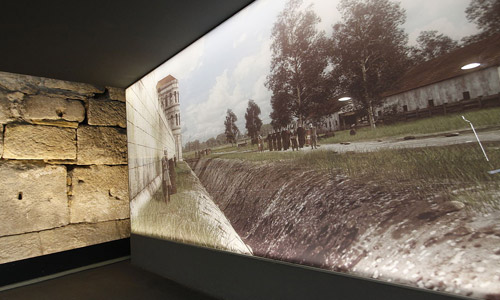