Karlskirche is a striking sacred building with a large cupola and represents the last great work of star Baroque architect Johann Bernhard Fischer von Erlach. Completed in 1739 by his son Joseph Emanuel Fischer von Erlach, the church was built as the result of a vow made by Emperor Charles VI during an epidemic of plague. The church is dedicated to the patron saint of the Habsburg emperor, Saint Charles Borromeo: the exhibits in the small Borromeo Museum in the church include the travelling clothes worn by Borromeo, the Bishop of Milan. Following its renovation, the High Altar, designed by Fischer von Erlach, has once again regained its original splendour. The opulent frescoes in the cupola by Johannes Michael Rottmayr contain 1,250 square meters of incredibly bright and beautiful paintings and depict the glory of Saint Charles Borromeo. 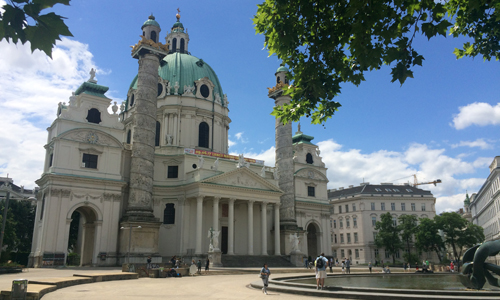 www.karlskirche.at
Infos for your visit
Videos Churchs Chruch on Youtube