Necessary
These cookies are necessary to run the core functionalities of this website, e.g. security related functions.
Statistics
In order to continuously improve our website, we anonymously track data for statistical and analytical purposes. With these cookies we can , for example, track the number of visits or the impact of specific pages of our web presence and therefore optimize our content.
Marketing
Marketing cookies come from external advertising companies and are used to collect information about the websites visited by the user.
Burg Nitra © Slovakia

Built on the site of a mighty Slavic fortified settlement, the seat of the counts of Nitra and the sovereigns of Great Moravia, Nitra Castle is the central dominating feature of Nitra, the oldest city in Slovakia. Today it is the seat of the Diocese of Nitra. The castle was built in the 11th century and consists of a number of sections. A cathedral with the adjacent bishop’s residence forms the heart of the castle. The original gothic Bishop’s Palace, next to the Bishop’s Cathedral, was given its late-Baroque form in the first half of the 18th century. Visitors to the castle will also find the outer fortifications interesting. The oldest sections of these fortifications date back to the Romanesque and Gothic periods. A particularly legendary feature is Vazil Tower, where the Hungarian Prince Vazul is alleged to have been imprisoned. 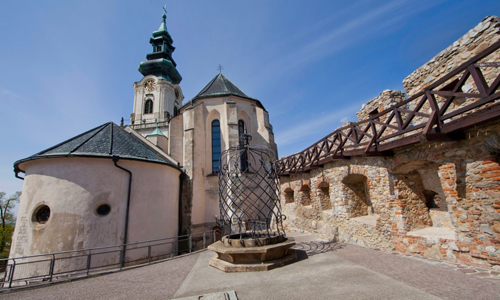