Situated on a narrow river terrace near the Danube Gorge is one of the oldest Bavarian monasteries, dating back to the seventh or eighth century. The imposing complex is built on a narrow space between the river and Frauenberg Hill and includes still-intact monastery buildings, a splendid church and thriving gardens behind sturdy walls. The new church, which was built as a replacement for its predecessor starting in 1716, represents the oldest project in which the Asam brothers worked together to carry out the entire project, architecture and room design, works of art and decorative work together and simultaneously introduced a novelty to Eastern Bavaria: the oval church interior, with which they had become familiar in Rome. The brothers also experimented with an innovative, indirect method of lighting: the low-lit interior of the church stands in contrast to the almost celestial brightness of the dome’s shell, which distinctly complements the fresco depicting the triumph of the Church. 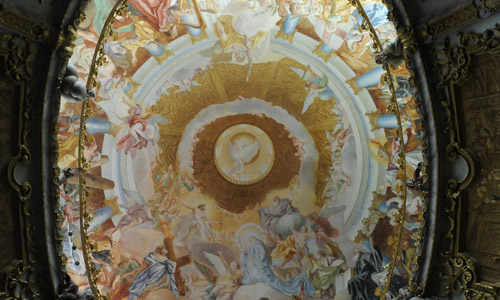