The imposing tower of the Old Town Hall is already visible from afar. Regensburg’s most prominent civic structure, this building was erected on the central market square in the 13th century. Following numerous extensions and conversions, visitors today can marvel at the three sections of the building complex – the town hall’s tower and adjacent palace, as well as the Gothic imperial hall and the Baroque town hall. The imperial assemblies convened by the emperor were held in the bright yellow section of the Old Town Hall starting in 1594. From 1663 to 1806, the Everlasting Imperial Diet met here in the former ballroom dating to the first half of the 14th century. The familiar German sayings ‘etwas auf die lange Bank schieben’ (procrastinate) and ‘am grünen Tisch sitzen’ (a bureaucratic decision with little bearing on real life) were also coined here. Today, Regensburg’s barrier-free tourist information office is housed on the ground floor. The splendid imperial hall directly opposite as well as the Fragstatt, a former interrogation room and torture chamber in the cellar of the town hall, can be visited on daily tours. 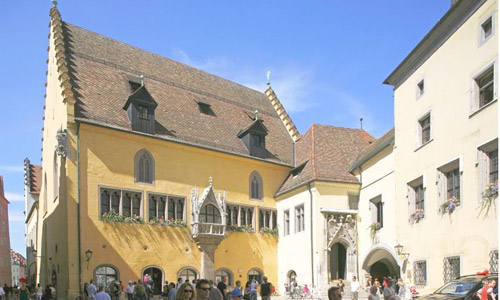