In Hungary, the fortunes of war began to shift in the Habsburgs’ favour. However, the road to victory was a hard one. Twice, the Turks arrived at the gates of Vienna: on the first occasion, in 1529, under Sultan Süleiman the Magnificent, and on the second, in 1683, with the largest army ever mustered at that time. This made the impact of the epic victory which the Austrians and their allies Poland and Bavaria won in 1683 on Kahlenberg all the greater. Prince Eugene of Savoy was promoted to general and completed the “perfect victory” of the House of Austria. The whole of Hungary fell into the possession of the Habsburgs. In the mid-18th century, Austria was the undisputed supreme power on the Danube. That sense of triumph manifested itself in the magnificent Danube Baroque style.

The Austrian brand of Baroque originated in churches and monasteries on the Danube. At St. Florian, Carlo Carlone began the Baroque conversion of the Priory. The splendid staircase, marble hall and imperial wing together constitute one great expression of homage to the Habsburg dynasty. From 1688, a massive new construction programme was started at Melk abbey; it was to take over half a century to complete the monumental building we know today. The Benedictine abbey at Göttweig also wanted to adapt itself to the new, victorious times. The result was the designing of the biggest Danube abbey of all, whose towering walls and domes were intended to symbolise triumph over Moslems and Protestants alike.

The Habsburgs’ pre-eminence in the Empire was now undisputed. Austria’s architecture, visual arts, theatre and music all attested to her glory and genius. The Hofburg Palace and the imperial city on the Danube competed with Versailles and Paris for political and cultural primacy. Vienna was given its grandiose Baroque appearance. The famous Baroque master builders Johann Bernhard and Joseph Emanuel Fischer von Erlach and Johann Lukas von Hildebrandt all worked under Emperor Charles VI (1711–1740). The dazzling Imperial Library, the Winter Riding School, and the Imperial Chancellory Wing, were built under their aegis. The Princes of Schwarzenberg, Liechtenstein, Lobkowicz, and the Schönborn, Auersperg and Trautson dynasties emulated their Emperor’s “Great Viennese World Theatre” with their magnificent palaces. Prince Eugene of Savoy, whose victories in both the east and the west had made the him richest man in the monarchy, had the Upper and Lower Belvedere Palaces built for himself on the gentle southern slope of the imperial city. 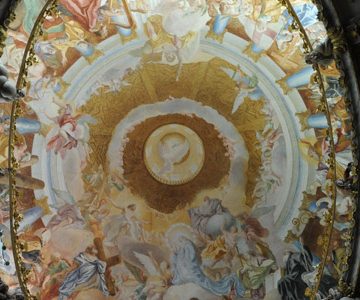 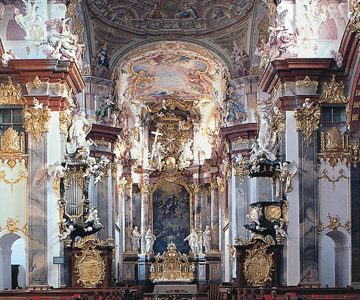 The Counter-Reformationist and strongly Catholic Habsburgs attached special importance to the redesigning of churches in the prestigious Baroque style. The aloof grandeur of the Karlskirche in Vienna, which was completed in 1737, reflects the imperial, religio-secular, exaggerated sense of power of the Habsburg dynasty. Likewise, at the monastery of Klosterneuburg, the two “crown domes”, bearing the imperial crown and archducal crown respectively, are a visual reminder of Emperor Charles VI’s plan to enlarge the old building into a grandiose imperial monastery residence. A new wave of Baroque edifices engulfed the banks of the Danube. The heaven-aspiring architecture of Melk abbey achieved its consummation.

The villages and towns along the Danube were now stamped with the Baroque style that still characterises them today. Krems was the workplace of the painter Martin Johann Schmidt, known as Kremser Schmidt (1718–1801). He decorated hundreds of churches in Lower Austria with ceiling frescos, and also painted the interiors of residential houses and inns. One frequently depicted Danube motif is the tower of the Himmelfahrtskirche, or Church of the Ascension, in Dürnstein, painted in light blue and adorned with balustrades and projections. In Linz, many groups of Baroque buildings are still preserved today. In the centre of Linz’s rectangular Hauptplatz, or main square, towers the 23-metre-high, cloud-shaped Trinity Column, interwoven with cherubs, monstrances and figures of saints. These sacred monuments are typical reminders of the Habsburg Counter-Reformation of the 17th and 18th century. Baroque trinity columns, statues of the Virgin Mary and sculptures of saints can be found in all the larger townships along the Route of Emperors and Kings, including those on the Slovakian and Hungarian Danube.

During the reign of Empress Maria Theresa (1740-1780), the imperial capital Vienna and the Austrian Danube provinces achieved a zenith in their cultural, economic and political importance. The Enlightenment gained ever more ground at the Hofburg Palace in Vienna: historians refer to it as “enlightened absolutism”. Numerous large buildings were erected, the most famous being Schönbrunn Palace, whose singular colour, known as “Schönbrunn yellow”, soon rubbed off onto all the official Habsburg buildings between the Rhine and the Carpathians. In Bratislava and Buda, too, the nobility constructed palaces, urban chateaus and gardens in the Viennese Baroque style.

Maria Theresa’s son, Emperor Joseph II, thought along large-scale and reform-oriented lines. After the Bavarian bloodline of the Wittelsbach family had died out, the opportunity arose to absorb Bavaria into the Habsburg Empire and to thus found a Danube state which stretched from Lech to Belgrade. However, Frederick II of Prussia immediately raised an objection to the scheme. It was thus “Old Fritz” – a Prussian – who saved Bavaria’s independence! Since then, the Inn river has formed the natural border between Austria and Bavaria.