Along its 258-kilometre journey through Lower Austria, the Danube travels through extremely diverse landscapes from west to east. Leaving the Nibelungengau region and its storied past, the river flows into what is likely the most enchanting river valley in Europe: Wachau, a UNESCO World Cultural Heritage site, is one of the oldest cultural landscapes in Austria and extends from Melk to Krems. This region is home to rich cultural treasures and is an internationally renowned wine-growing region and meeting point for connoisseurs from around the world. Right next door, the Kremstal and Wagram regions are equally well-known for their wines. One ‘landmark’ of note is the mighty loess terrace that wends its way through the countryside north of the Danube, offering sublime views. The broad plains of the Tullner area of the Danube basin extend around the four towns of Traismauer, Tulln, Stockerau and Korneuburg, where historic locales and sparkling open air venues beckon. Passing through the imperial city of Vienna, the Danube finally flows into the former Roman region of Carnuntum, past Baroque castles in the Marchfeld basin, Carnuntum archaeological park and Danube-Auen National Park. Numerous archaeological finds and remnants of walls bear witness to the Roman limes in Lower Austria as well: these include the former settlement of ‘Favianis’ in Mautern, the former ‘Cannabiaca’ in Zeiselmauer and above all the area of today’s village of Petronell, where the Roman Legion camp of Carnuntum was established in 15 A.D. 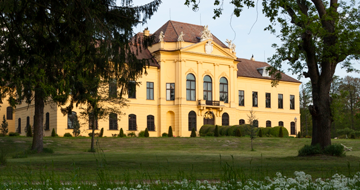